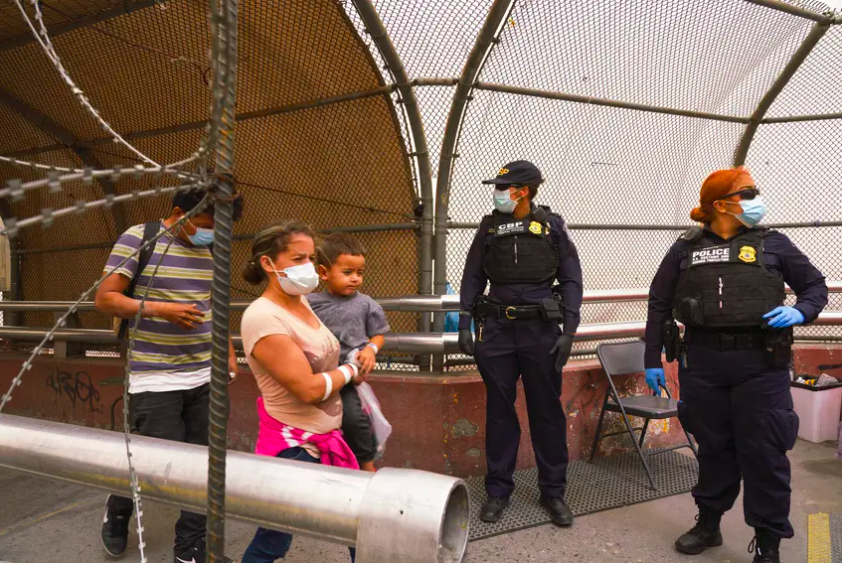 Gov. Greg Abbott called the sharp increase of unaccompanied minors arriving at the Texas border a “humanitarian crisis” on Wednesday and said the state government would increase its efforts to investigate and apprehend the human traffickers who help migrants illegally cross the border.

Speaking across the street from the Dallas convention center that is being converted into a temporary shelter for migrant children by the Federal Emergency Management Agency, Abbott also criticized the federal government’s management of the situation.

The governor asked federal authorities to give Texas Department of Public Safety officers access to migrant children at the Kay Bailey Hutchison Convention Center, where the migrants will arrive as soon as Wednesday, so they can interview minors and try to identify human traffickers.

Migrant apprehensions have trended upward this year — more than 100,000 people were either apprehended by or surrendered to federal immigration officials on the U.S.-Mexico border in February.

Around one of every 10 undocumented migrants that immigration officials encountered in February was an unaccompanied minor, a 62% increase from January. According to The Washington Post, the Biden administration is holding more than 4,200 teenagers and younger children in detention cells along the border designed for adults. By law, the U.S. Department of Health and Human Services should take custody of minors within 72 hours, but the average time that minors have been held is now 120 hours.

The Department of Homeland Security asked FEMA for assistance, and FEMA announced that it would use the Dallas convention center as well as a former camp for oil field workers in Midland to temporary shelter minors.

Similar increases in migrant apprehensions have happened in previous years under other administrations: In May 2019 during the Trump presidency, for example, federal immigration officials recorded more than 144,000 apprehensions, according to U.S. Customs and Border Protection data. And in 2014 the Obama administration faced a huge influx of migrants, mostly from Central America, with up to 4,000 arriving daily at one point.

Abbott said Wednesday that he expected the number of migrants arriving at the border to increase in the short term.

“The number of children you see have come across the border already is going to be a tiny fraction of what we will see in the coming months,” Abbott said. “We’re trying to get ahead of this as much as possible.

“That said, let me be very clear about this, and that is Texas is willing to step up and help out, but this is the Biden’s administration responsibility.”

Earlier this month Abbott announced that he would deploy more resources from the Texas Department of Public Safety and the Texas National Guard to secure the border. On Wednesday, he said he was expanding that effort, called Operation Lone Star, to combat human trafficking.

Since his inauguration in January, Biden has proposed a number of immigration measures that counter not only the Trump administration’s directives, but those of previous administrations too, in what researchers at the Brookings Institute have called an “immigration reset.”

Trump declared a state of emergency at the border at the start of 2019, but one of Biden’s first actions was to end this policy and cut the funds that had been redirected to build the border wall. Biden also ended the “remain in Mexico” policy that forced tens of thousands of asylum seekers to wait in Mexico for their court hearings.

In an interview with ABC News on Tuesday, Biden asked immigrants to avoid coming to the border and announced that the federal government plans to create centers where people can apply for asylum in countries south of the border. “Don’t leave your town or city or community,” he said.

In a statement prior to Abbott’s press conference, Dallas County Judge Clay Jenkins said that the facility in the convention center will allow children and teenagers to socialize and exercise after having faced “incredible trauma.”

“Now is not the time to politicize the plight of these children to distract from the state’s failures to provide [COVID-19] vaccine or protect the power grid,” Jenkins said. “There is work to be done to fix our broken immigration system. Traumatized kids are not a proxy for this issue or anyone’s viewpoint.”

Immigration advocates criticized Abbott’s tone during the press conference and accused him of trying to “sow fear” and “spread disinformation.”

“To address this moment in the most humane way possible, we need ample funding and resources from our federal government, including more social workers, trauma specialists, medical professionals, and human rights specialists who can provide direct, needed assistance — NOT more militarization along our southern border,” said Jessica Azua, Immigration Justice Director of the Texas Organizing Project, in a statement.

Nonprofits in the Dallas area asking community members for assistance in helping the young migrants who will be sheltered at the convention center. People interested in this effort can reach Dallas Catholic Charities for more information.

“We are looking for volunteers that speak Spanish that can help welcome the children and settle them,” said Josephine López Paul, lead organizer with Dallas Area Interfaith.