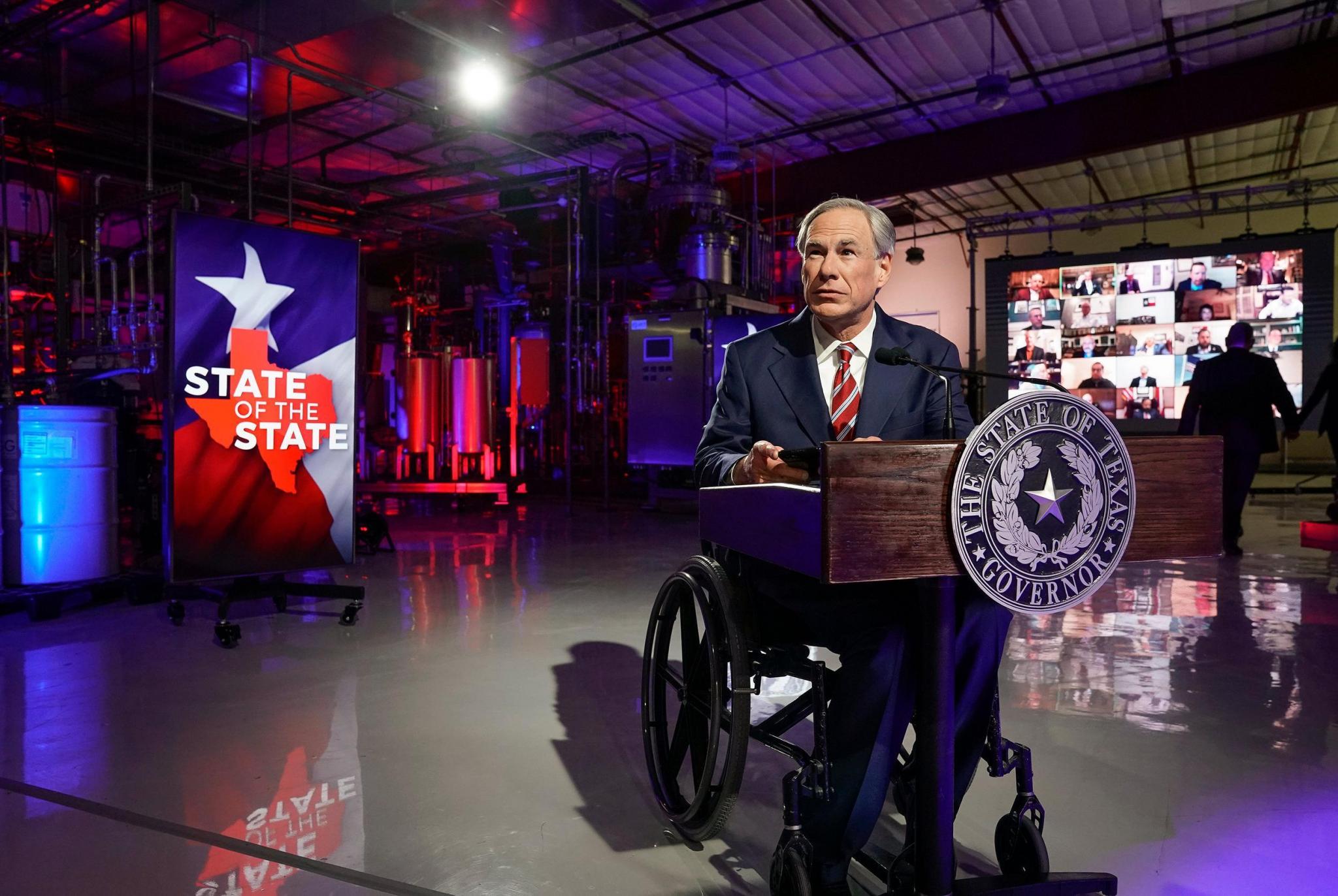 Gov. Greg Abbott on Monday unveiled a legislative agenda centered on the state’s recovery from the coronavirus pandemic and a series of more politically charged issues such as police funding and “election integrity.”

In his biennial State of the State speech, Abbott declared Texas is “brimming with promise” as it seeks to turn the corner on the virus and return to economic dominance, despite the fact the state remains very much in the throes of the pandemic.

“Hard-working Texans are at the forefront of our agenda this legislative session as we build a healthier, safer, freer and more prosperous state,” Abbott said.

Abbott designated five emergency items, or items that the Legislature can vote on within the first 60 day of the session, which began Jan. 12. Those items were expanding broadband internet access, punishing local governments that “defund the police” as he defines it, changing the bail system, ensuring what he described as “election integrity” and providing civil liability protections for businesses that were open during the pandemic.

Abbott also asked lawmakers to pass laws that would strengthen civics education in Texas classrooms, part of a push by the governor to make sure that the many people moving to Texas are well-versed in what he believes has made the state successful. In other non-emergency items, Abbott said he wanted to further restrict abortion and make Texas a “Second Amendment sanctuary state” by keeping “any government office anywhere” from infringing on Texans’ gun rights.

On issues stemming from the pandemic, Abbott called for legislation to permanently expand telemedicine and to prevent “any government entity from shutting down religious activities in Texas,” nodding to a debate early on in the pandemic over whether churches counted as essential businesses. And Abbott briefly touched on the debate among some in his own party over how aggressively he has wielded his executive powers to respond to the coronavirus.

“I will continue working with the Legislature to find ways to navigate a pandemic while also allowing businesses to remain open,” Abbott said.

Abbott gave the primetime televised address from Visionary Fiber Technologies in Lockhart, eschewing the traditional setting of a joint legislative session inside the House chamber as lawmakers continue to worry about gathering en masse during the pandemic.

Democrats pushed back on Abbott’s speech by accusing him of giving an overly rosy view of the state’s coronavirus response. Calling Abbott the “worst Governor in modern Texas history,” the state Democratic Party chairman, Gilberto Hinojosa, said in a statement that Abbott “buries his head in the sand and pretends like nothing is happening.”

While the state’s coronavirus cases, hospitalizations and deaths are decreasing after record highs in January, they still remain very high relative to other points in the pandemic.

This will be Abbott’s last session before he is up for reelection in 2022, and he alluded to one potential Democratic challenger for a third term: Beto O’Rourke, the former El Paso congressman. Abbott said gun rights are “under attack” and noted politicians have said, “Heck yes, the government is coming to get your guns” — a paraphrase of O’Rourke’s 2019 statement embracing a mandatory buyback program for assault weapons.

The session is also coming at the start of a new Democratic presidential administration in Washington, D.C. While Abbott and other top Texas Republicans have made clear they plan to vigorously challenge President Joe Biden’s policies, the governor made only one allusion to Biden in his speech, saying that “because of the federal government’s open border policies, Texas must fortify its efforts to secure our border.”

When it came to legislative priorities, Abbott was noticeably light on details in some cases. On election security, Abbott did not say what he was looking for beyond instilling “trust and confidence in the outcome of our elections.” Texas already has some of the most restrictive voting laws in the country, though the state’s Republicans are newly focused on the issue after fighting efforts by Democrats to make it easier to vote ahead of the November election due to the pandemic.

Abbott’s prioritization of election security comes three months following a November election after which top Texas Republicans, including U.S. Sen. Ted Cruz and Attorney General Ken Paxton, played central roles in fueling former President Donald Trump’s baseless claims of widespread fraud. Those conspiracies led to a violent siege on the U.S. Capitol the day Congress met to certify the results last month. Abbott was among the Republicans who did not immediately recognize Biden’s victory after major news outlets declared him the winner, and he was later supportive of Paxton’s unsuccessful lawsuit challenging the results in four battleground states.

Abbott did not mention any particular proposal to penalize local governments that cut police funding, though he has previously pitched ideas like freezing property tax revenues for cities that do so. Abbott has focused almost all of his ire on Austin, whose City Council voted last year to cut its police department budget and redirect some of the money to social services. Austin officials did so after the death of George Floyd, a Black man, re-energized a movement against police brutality against Black Americans. It also followed Austin officers’ fatal shooting of Mike Ramos, an unarmed Black and Latino man.

In Texas Democrats’ video response to Abbott’s speech, Candice Matthews of the Texas Coalition of Black Democrats said lawmakers instead need to address inequities in law enforcement’s treatment of communities of color.

“Our communities should not have to live with trauma and fear of wondering if they, or their families or their neighbors will be the next to die from police brutality,” Matthews said in the video. “We demand that every single racist policy be uprooted.”

Shortly after railing against the “defund the police” movement in his speech, Abbott said the state still “cannot ignore the need to improve policing” and called for better “tools and training” for cops. But he did not make reforming police behavior or accountability an emergency item like he did with police funding.

“We need real help from the state, not more politics or finger-wagging,” Austin Mayor Steve Adler said in response. “State interference with local government is not the answer.”

While Abbott did not go too in-depth on some topics, he prescribed a specific piece of legislation when it came to changing the bail system: the Damon Allen Act. The proposal, which Abbott unsuccessfully pushed last session, is named after a slain state trooper. The suspect in Allen’s death was out on bond. Bail reform efforts often aim to stop cash bail practices that hold people in jail before they are convicted solely because they are poor, but Abbott said last week his bill would focus instead on keeping “dangerous criminals off the streets.”

On abortion — another area where Texas already has some of the toughest laws in the country — Abbott specified that he wanted to “make explicit what should be obvious: No unborn child should be targeted for abortion on the basis on race, sex or disability.” Similar legislation filed last session would have barred later-term abortions even in the case of severe fetal abnormalities, which critics refer to as “discriminatory abortions.”

In between the red meat, Abbott continued to paint an optimistic view of the state’s slow and staggered economic recovery from COVID-19.

Democrats focused heavily on Abbott’s pandemic handling in a response to his speech that aired immediately afterward. Among the speakers was Julián Castro, the former San Antonio mayor, U.S. housing secretary and 2020 presidential candidate. The Democratic response also included Oscar Leeser, the new El Paso mayor who lost both his mom and brother to COVID-19 last year.