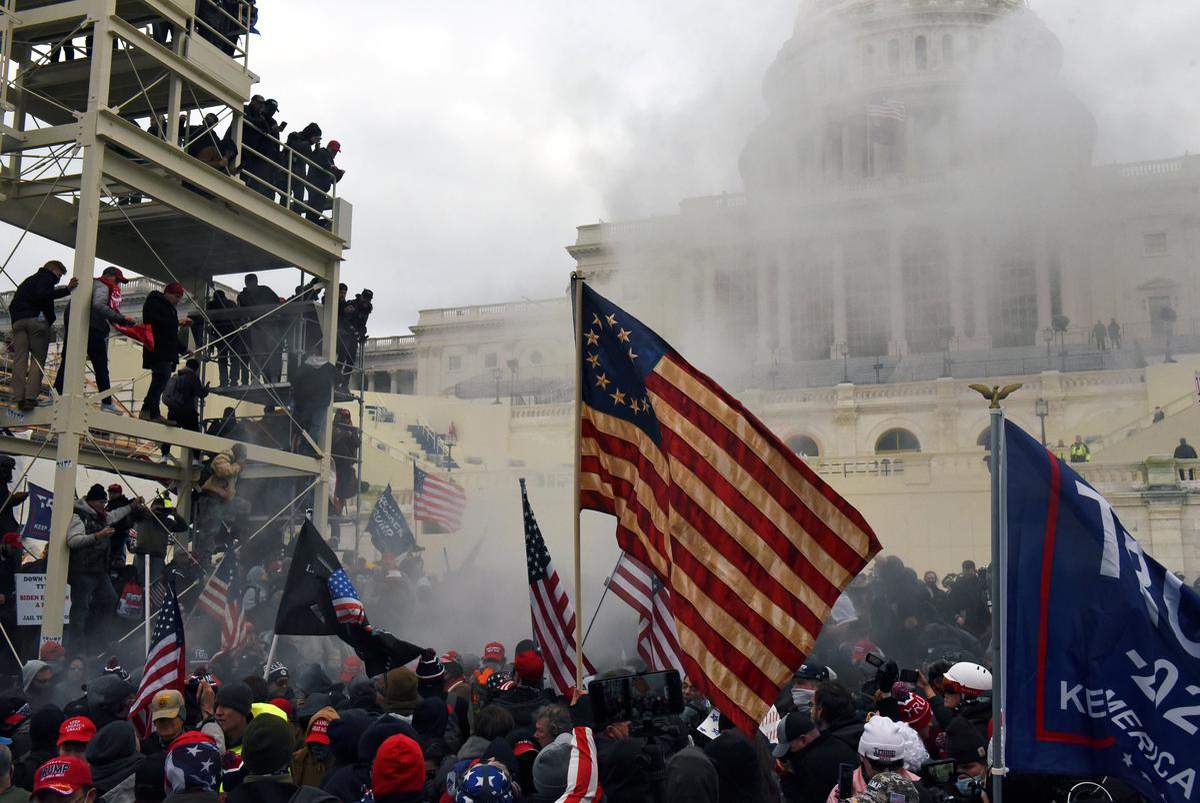 The Republican Party of Texas has fired a staffer after learning about a series of social media posts he made, including one that places him in a crowd of people steps outside the U.S. Capitol last month on the same day that a mob of former President Donald Trump’s supporters stormed the building.

The staffer, field organizer Kevin Whitt, has also published video of himself arguing with an employee of a Washington, D.C., pizzeria over the “Pizzagate” conspiracy theory and has defended the Proud Boys, the far-right nationalist group.

Less than two hours after The Texas Tribune contacted the Texas GOP about Whitt on Monday afternoon, the party said it had fired him.

“Information has come to light of some troubling video of one of our former employees,” party spokesperson Luke Twombly said in a statement to the Tribune. “Due to this footage, we terminated our relationship.”

In an interview after the firing, Whitt told the Tribune that the party was “canceling conservatives, obviously.” He said he never got any indication his job was in jeopardy until the party emailed him Monday afternoon to tell him he was fired.

Whitt was hired Nov. 30, 2020, as a field organizer, Twombly said. He is best known as an activist who talks about his experience leaving behind his life as a drag queen to become deeply religious and advocate on social conservative issues.

On Jan. 7, the day after the Capitol siege, Whitt posted a video on Instagram showing a crowd of people a short distance outside a Capitol entrance, alarms going off in the background. While Whitt is not shown in the video, he can be heard speaking behind the camera.

“This is the door of the Capitol,” Whitt says. “I’m trying to move as close as I can.”

The caption of the video says, “Say Her Name, Ashli Babbit!! RIP Patriot.” Babbit was the California woman who police fatally shot as she tried to climb through a broken window during the riot.

Whitt told the Tribune that he did not enter the Capitol and was not trying to. He had been in town to attend the rally that Trump spoke at earlier that day, but Whitt said he decided not to attend when he saw how early he would have had to arrive and instead stayed at his hotel and slept in. When he woke up, he said, he saw the news of the escalating situation at the Capitol and headed over to see what was happening. Whitt said the crowd outside the entrance where he was recording was getting rowdy, so “I stepped outside and got out of it.”

“I was being nosy,” Whitt said.

Whitt was not the only Texas Republican who traveled to the nation’s capital that day to protest the certification of Trump’s defeat in the Electoral College. Attorney General Ken Paxton spoke before Trump at the same rally, and state Rep. Kyle Biedermann of Fredericksburg has said he “peacefully marched” to the Capitol.

Another video on his Whitt’s social media accounts, dated mid-December, shows him confronting a woman inside the Comet Ping Pong pizzeria in Washington, D.C., which has been at the center of the debunked Pizzagate conspiracy theory. The conspiracy theory, which emerged ahead of the 2016 election, claims that Democratic elites are running a child sex-trafficking ring out of the pizzeria. The restaurant and its employees have been repeatedly harassed and threatened by people who believe the conspiracy theory. In 2017, a man was sentenced to four years in prison after firing an AR-15 rifle while searching inside the restaurant.

In the video, Whitt asks the woman how she feels about working “in a restaurant that is known for pedophilia.” The woman asks Whitt to leave, and he says she can call the cops and that he will not leave.

Whitt then shouts into the restaurant: “Y’all are abusing children. You are pedophiles. Do not eat here. All of y’all should leave. They are serving up dead kids. This place is known … for a restaurant that is sex trafficking children.”

Whitt told the Tribune that he “100% believe[s] that Pizzagate is real.” Before the video began, Whitt said he had been dining with friends at the restaurant and was heading to the bathroom, recording artwork on the walls and got into a confrontation with the woman about whether he was allowed to record.

Both the videos from the Capitol riot and the pizzeria disappeared from Whitt’s social media accounts after the Tribune contacted him about them.

In other social media posts, Whitt has aligned himself with the Proud Boys, some of whose members have been charged with federal crimes such as conspiracy, civil disorder and assaulting an officer in the Capitol riot. In mid-December Facebook post, Whitt called the Proud Boys an “amazing” group of men and said there may be a “few bad apples that do dumb stuff” but that was to be expected when people organize themselves.

Under the leadership of chairman Allen West, who was elected last summer, the state party has had to answer for perceived connections to the fringes of the Trump-era GOP. Its slogan, “We are the storm,” uses language commonly used by followers of the QAnon conspiracy movement. West has said the slogan is drawn from an unattributed quote that he likes and denied any QAnon influence.

The QAnon movement adheres to an unfounded theory that a mysterious government official named “Q” is exposing a plot against Trump by “deep-state” actors involving satanism and child sex trafficking. Some believers have been accused of plotting or carrying out violent crimes, including killing a New York mob boss.

Whitt spoke at a “We Are The Storm” rally on Dec. 5 in Dallas that the state party had promoted on social media. Speakers appeared in front of a podium that had the state party’s seal on it.