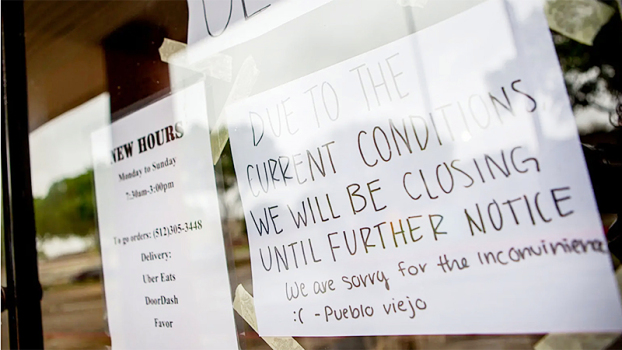 While the national unemployment rate declined, the state’s sharp increase from the seasonally adjusted August unemployment rate of 6.8% shows how some industries that had hoped to weather the coronavirus pandemic’s economic recession have not been able to do so, economists said, and instead have announced large numbers of layoffs. The number Friday also shows that a lot of Texans are jobless seven months into the pandemic despite widespread business reopenings across the state.

Friday’s announcement provides what could be the clearest snapshot of the Texas economy ahead of the Nov. 3 election. Peter Rodriguez, dean of the Jesse H. Jones Graduate School of Business at Rice University, called the increase “evidence that we didn’t take the short route out of the recession.”

“We’re going to be here for a little while,” he said.

The airline industry has been particularly hard hit in recent weeks. That sector laid off tens of thousands of people as the travel industry continues suffering during the prolonged pandemic, according to The Washington Post. American Airlines is based in Fort Worth, Southwest Airlines is based in Dallas and United Airlines counts Houston as one of its hubs.

“What we saw with companies like the airlines and others is happening throughout the economy,” Rodriguez told The Texas Tribune. “Airlines held out in hope for more rapid recovery. But as that hope faded, a lot of them cut back more and made tough choices.”

The U.S. Department of Labor is expected to release the state-by-state unemployment rates Tuesday. A spokesperson for the workforce commission said next week’s release from the labor department will also show Texas’ unemployment rate in September was 8.3%.

The unemployment rate increased as the workforce commission prepares to reinstate its requirement that jobless Texans must search for work in order to receive unemployment benefits, a policy that is set to go into effect Nov. 1.

Workers in the state’s signature industry, oil and gas, have lost work in massive waves. There were 22.6% fewer workers last month in the mining and logging industry, which includes the oil and gas sector, compared with September 2019, according to non-seasonally adjusted numbers.

That was reflected in the oil-rich Permian Basin. Odessa’s unadjusted unemployment rate increased from 11.1% in August to 13.2% in September. Midland’s unadjusted rate went from 8.1% to 9.6% in that one-month period.

In the Rio Grande Valley, the unadjusted unemployment rate in the McAllen metro area was 12.8% in September; in Brownsville and Harlingen, it was 11.1%.

Salvador Contreras, a professor of border economics at the University of Texas Rio Grande Valley, said another federal coronavirus aid package could help curb the dire numbers and would help prop up smaller businesses and out-of-work Texans.

“But there doesn’t appear to be any stimulus money coming soon,” Contreras said.

Congress initially passed legislation in March to send money to businesses and individuals, but much of that money has now dried up, and economists say more federal stimulus funding is needed to keep the economy afloat.

The leisure and hospitality industries, however, saw a 2.1% gain in employment from August to September, following a devastating stretch when in-person events and the tourism business came mostly to a halt in March. Still, the number of jobs in those industries is still down 16.1% compared with a year ago.

Prescribing solutions for the economic issues in Texas, however, does not start with the economy, said John Francois, a professor of economics at West Texas A&M University.

“It’s a health issue,” Francois told The Texas Tribune. “So fundamentally, we cannot just throw economic solutions at it.”

But the state and the country can do both, Francois said. Significant stimulus legislation for businesses and individuals could work in conjunction with a countrywide plan to curb the coronavirus. Friday’s new unemployment rate came as coronavirus infections and the number of people hospitalized with COVID-19 in Texas are on the rise.

“One outcome we definitely know is that when you slow down the spread of the virus, you get a healthy population that can go out to eat, to Walmart and stores to buy whatever they need,” Francois said. “However, if you don’t have a healthy population and don’t have stimulus checks coming in — which they should — all progress is just temporary.”

Mesquite Man Arrested and Charged With Murder After Shooting His Wife