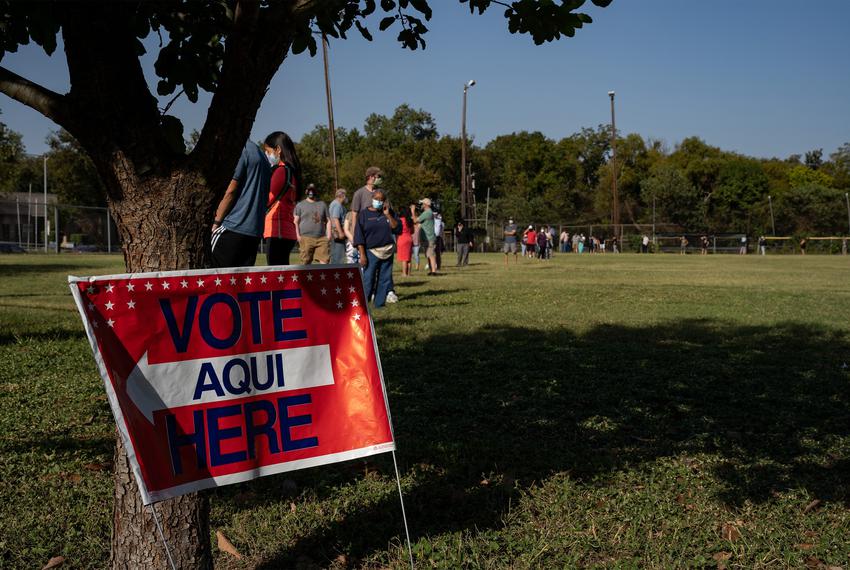 The first day of early voting in Texas saw long lines, a record number of voters in the state’s most populous county and relatively few hitches as voters surged to polling places despite the novel coronavirus pandemic.

Voters in Harris County shattered the record for in-person ballots cast on the first day of early voting, with more than 128,000 people voting, according to the county elections office. The previous record was set in 2016, when about 68,000 people cast votes there.

More than 25,000 ballots were cast in Travis County by 4 p.m., said County Clerk Dana DeBeauvoir, adding that she was “tickled pink” by the number of people who showed up to vote. Nearly 33,700 people in the county voted during the first day of early voting in 2016.

“We knew today was going to be a really big day, but the voters have sent us the signal that they are really, really ready to vote,” DeBeauvoir said.

In some parts of the state, voters waited in lines of three hours or more. That’s expected, officials said, as new poll workers get accustomed to the process and eager voters show up in large numbers.

Despite the long lines, officials reported only isolated problems across the state.

The Fort Bend County Commissioners Court voted Tuesday afternoon to extend early voting hours for the rest of the week after an election system snafu earlier in the day that left all of the county’s polling places temporarily closed. Polling places will close at 7 p.m. instead of 5 p.m. this week across the county.

Oldham said the system will be updated Tuesday evening after polls close to prevent further issues. The majority of precincts were back online as of 9:15 a.m., he said, and voting had resumed at all locations by the afternoon.

“I will do everything in my power to ensure every voter in Fort Bend County is able to cast their ballot this and every election cycle,” County Judge KP George said in a statement. “Protecting democracy and the rights of voters is Fort Bend County’s top priority.”

George, who was on-site at the Smart Financial Centre mega voting site, said in a video posted to Facebook that “those who are responsible will be held accountable” for what he called “glitches in the voting system.”

DeBeauvoir said voting “started a bit slower as crews got used to it” but added that she does not expect any other issues going forward.