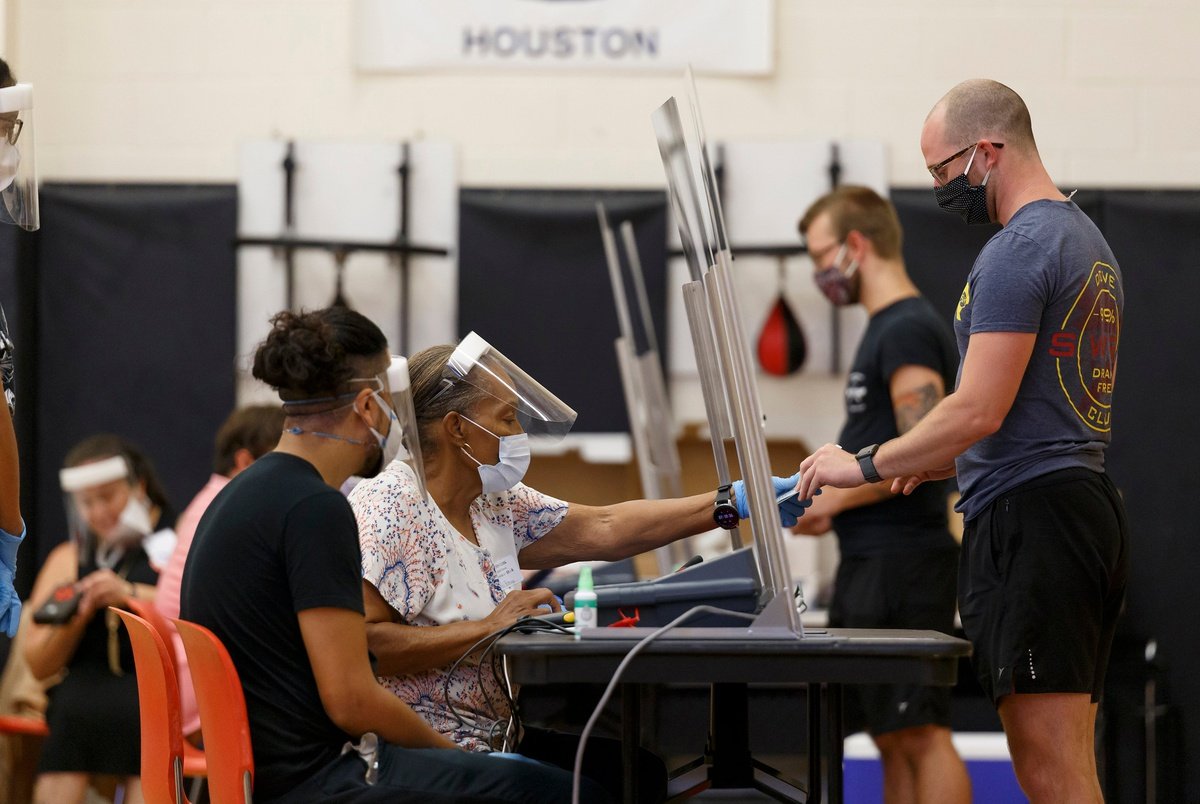 Early voting kicks off Tuesday for a high-stakes Texas election that has Republicans battling to maintain their dominance statewide and in a raft of down-ballot races centered on the suburbs — all amid a pandemic that has upended political normalcy.

Democrats enter the early voting period brimming with optimism. Statewide, they believe their presidential nominee, Joe Biden, has a real shot at winning Texas, and that their U.S. Senate candidate, MJ Hegar, is gaining momentum at the right time. The confidence increases farther down the ballot, where they are targeting 10 GOP-held U.S. House seats and driving to reclaim the Texas House majority they lost in the 2002 election.

While Republicans may not be as openly concerned with President Donald Trump or U.S. Sen. John Cornyn, they concede they are in for a battle down-ballot.

“The fight in Texas without a doubt is on the local level, it’s your down-ballot races where you see most of the spending and most of the political activity,” said Matt Langston, a Texas Republican consultant. “The big question: Are these campaigns gonna be able to execute in the final three weeks of the election? … This is a very strong turnout operation. Republicans have always done extremely well. 2020 is gonna put it to a test.”

Both sides are bracing for massive turnout, and voter registration numbers have been soaring. The secretary of state’s office said Monday that Texas now has 16.9 million registered voters, up by nearly 300,000 just since Sept. 22, when the office last announced a total. The registration deadline was Oct. 5, and applications are still being counted, making it possible that the final count for the November elections will top 17 million. That would be close to 2 million more voters than were registered for the 2016 election.

Looming over the typical political questions about the November election is months of legal debate and drama over how Texans will be able to vote due to the pandemic. Democrats unsuccessfully sought to expand mail voting, which Republican leaders resisted. Gov. Greg Abbott instead extended the early voting period by six days and gave voters more time than usual to turn in their mail ballots in person if they prefer.

Abbott’s decision drew a lawsuit from some prominent members of his own party, including Allen West, chairman of the Republican Party of Texas, and state Agriculture Commissioner Sid Miller. Last week, the Texas Supreme Court sided with the governor, keeping the prolonged early voting period intact.

Abbott’s legal woes did not end there, though. Earlier this month, he said there could be only one drop-off site per county for mail ballots, prompting multiple lawsuits by Democrats and voting rights advocates. A federal judge ruled against Abbott on Friday, though a federal appeals court reversed that decision later in the weekend, leaving little time for further litigation before early voting starts Tuesday.

On top of it all, a federal judge struck down Texas’ new ban on straight-ticket voting last month. Days later, the 5th U.S. Circuit Court of Appeals reinstated the 2017 state law, and the election is proceeding without the option.

“I think that the court battles have certainly been confusing,” said Carol Donovan, the chairwoman of the Dallas County Democratic Party. “It seems like just as soon as you say, ‘Oh my goodness, we have straight-ticket voting again,’ the 5th Circuit slaps it down.”

The pandemic also has forced changes to the way candidates campaign.

Across the board, Republicans have been more willing to resume in-person campaigning, while Democrats are still keeping their campaigns more virtual. The Democratic nominee for U.S. Senate, Hegar, recently said she has multiple in-person trips “on the books, but we’re doing it in a relatively low-key … way.”

“I am trying to make sure that we act in a way that’s responsible,” Hegar told reporters during a call earlier this month. “So I do in-person events that are not rallies … that would risk infecting my supporters, press, staff, the people that come to an event like that. I am doing in-person things like meeting with elected officials like mayors, and unions.”

The most enticing opportunity for Democrats in November is at the very top of the ticket, where Biden appears to be within striking distance of becoming the first Democratic presidential candidate to carry the state since 1976. For months, polls have pointed to a close White House race in the state, though some of the latest nonpartisan surveys have given Trump a little breathing room. Still, all evidence suggests Trump will carry the state by less than his 9-point margin in 2016, which was the slimmest spread for a GOP nominee in Texas in two decades.

Despite the polling, some of Trump’s top boosters in Texas have raised the prospect that he could best his 2016 margin this November here. They include Lt. Gov. Dan Patrick, who chairs Trump’s reelection campaign in the state, as well as West, the GOP chairman.

“I think that the president will be able to at least maintain that 8- to 9-point advantage he had in Texas and maybe even exceed it because we’re seeing much success in registering new voters, registering new Republican voters and definitely even some people that” previously voted Democrat, West said in an interview last month at The Texas Tribune Festival. Speaking more broadly about Republican prospects, West said he was “not overconfident, but I’m confident that we’re gonna do very well come November.”

Whether the Biden campaign is playing to win in pricey Texas remains an open question, and the clock is ticking. While the campaign had over $6 million in TV time reserved in the state at one point, it has since altered its reservations, and it has not shared with reporters the extent of its investment in the state between now and Nov. 3.

On Tuesday, the first day of early voting in Texas, the Biden campaign is dispatching the nominee’s wife, Jill Biden, to Dallas, El Paso and Houston. She will be the highest-profile surrogate to make an in-person trip to the state during the general election, following a visit last week by Doug Emhoff, the husband of Biden’s running mate, California U.S. Sen. Kamala Harris.

After the presidential contest, Cornyn’s reelection race is the next big attraction on the statewide ballot. The third-term GOP incumbent is being challenged by Hegar, a former Air Force helicopter pilot, in a contest that has not matched the excitement of Beto O’Rourke’s 2018 near-miss challenge to U.S. Sen. Ted Cruz, but nonetheless remains competitive.

Republicans have long been optimistic that Cornyn would outrun Trump in Texas and secure reelection, if not overwhelmingly, and polls have generally confirmed that. However, there have been ample signs recently that the race is intensifying, especially after Hegar announced she raised $13.5 million in the third quarter. Cornyn has not yet revealed his haul for the period, but he has said she outraised him for the period and “basically wiped out” the large cash-on-hand advantage he has had since the beginning of the cycle.

Late last week, Cornyn went negative for the first time on TV, debuting an ad that bashes Hegar as “too liberal for Texas.” Meanwhile, a pro-Cornyn super PAC that has been attacking her online is set to move its campaign to TV on Tuesday.

Moving beyond statewide elections, the opportunity for Democratic inroads opens up widely, starting with a plethora of U.S. House contests that have captivated national attention.

The Democratic Congressional Campaign Committee has designated 10 GOP-held seats as pickup opportunities, an ambitious battle plan that has only grown since the committee set up shop in Texas early in the election cycle. National Republicans, meanwhile, are working to flip back the two Texas seats they lost in 2018.

In reality, though, the battlefield looks narrower, with almost all outside national spending concentrated on five races: the reelection campaign of Rep. Lizzie Pannill Fletcher, D-Houston, a GOP target, as well as four Democratic targets: Rep. Chip Roy, R-Austin, and the seats of retiring Reps. Will Hurd, R-Helotes; Kenny Marchant, R-Coppell; and Pete Olson, R-Sugar Land.

By all appearances, the most competitive contests as early voting begins are for Hurd’s seat and Roy’s. In Hurd’s district, which was once the only real swing seat in Texas, Republican Tony Gonzales and Democrat Gina Oritz Jones are locked in an all-out brawl over health care, their district roots, how they are campaigning during the pandemic and Gonzales’ affiliation with President Donald Trump, who has endorsed him.

Roy and Democrat Wendy Davis, meanwhile, are battling over their support for law enforcement and Roy’s skepticism of coronavirus shutdowns and other pandemic measures. On Friday morning, Davis launched a TV ad in which she says the country needs “criminal justice reform, but I don’t support defunding the police.” Later in the day, Roy released an ad seeking to get a hold of the pandemic debate.

The other down-ballot attraction is the fight for the Texas House majority, a major prize ahead of the 2021 redistricting process. Democrats are currently nine seats away from the majority in the 150-member House, after picking up 12 in 2018. And while they have to defend those freshmen, they are exuding confidence about being overwhelmingly on offense.

Democrats entered the cycle with their sights set on as many as 22 pickup opportunities, and they are not backing away.

“The battlefield remains wide open,” said Keir Murray, a spokesperson for the Texas House Democratic Campaign Committee. “We take nothing for granted, but we’re optimistic about our prospects for November, and our candidates have their feet on the gas pedal and are gonna fly as fast as they can through the tape, the finish line, on Nov. 3.”

The latest campaign finance reports were released last week in the state House battle, and they showed a gusher of cash pouring into the fight from state and national groups. Across the 34 seats believed to be in play — a number that also includes now-Democratic districts where Republicans hope to prevail — Democrats raised $6.7 million to $5.3 million for Republicans in monetary donations, while Republicans edged Democrats $10 million to $9.1 million when in-kind contributions were factored in. Republicans ended the period — early July through Sept. 24 — with more cash on hand, $9.9 million to $6.2 million for Democrats.

One of the main state-based groups defending the majority, the Associated Republicans of Texas, sought to ring the alarm Monday about out-of-state influence, saying “it’s clear that out-of-state coastal elites are having to spend millions in an attempt to drag their Democrat candidates over the finish line because their masked progressive agenda isn’t catching steam in the Lone Star State.”

As early voting gets underway, both parties are still confronting some division within their ranks. Hegar’s Democratic primary runoff, Royce West, said Friday he would not vote for her, claiming she has a problem with Black voters. The next day, a protest of Gov. Greg Abbott’s coronavirus restrictions outside the Governor’s Mansion drew two high-profile fellow Republicans: West and Miller.

“I was elected as the Chairman of the Republican Party of Texas, not anyone’s fan club,” West said Sunday, defending himself.