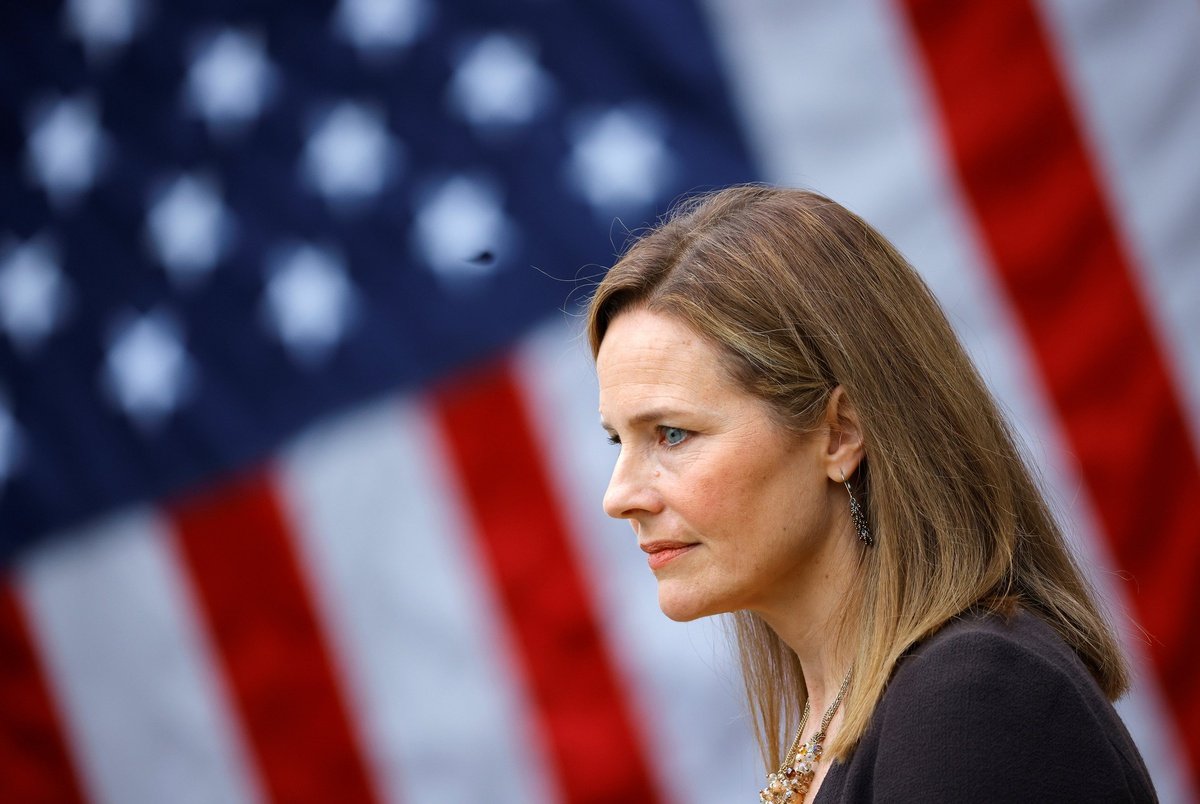 “It is my honor to name one of our nation’s most brilliant and gifted legal minds to the Supreme Court,” Trump said in the Rose Garden. “She is a woman of unparalleled achievement, towering intellect, sterling credentials and unyielding loyalty to the constitution.”

If confirmed by the Senate, Barrett, who sits on the Illinois-based 7th U.S. Circuit Court of Appeals, will replace the late Supreme Court Justice Ruth Bader Ginsburg, who died Sept. 18.

Her nomination will kick off what’s expected to be one of the most contentious confirmation battles in recent memory. Republicans say they intend to seat Barrett this year, even though the vacancy on the court opened up less than two months before Election Day. Democrats are determined to fight the nomination, noting that Republicans refused to confirm former President Barack Obama’s nominee for the Supreme Court in 2016 when a seat came open 269 days from Election Day.

“Judge Barrett has impressed the brightest judicial and legal minds with her profound understanding of the law,” Cornyn said in a statement. “During the confirmation process for her current position, Judge Barrett proved she has not only the legal expertise, but also the proper temperament and character to serve on the high court.”

Cornyn also said Monday the Senate should not rush the process this time around but that the Senate “will vote on that nominee sometime this year,” either before or after the election. He said in May that he thought the Senate had a “responsibility” to take up a Trump court nomination if it came up this year.

In a statement, Cruz noted that Barrett was confirmed to the 7th Circuit in 2017 with bipartisan support. But he said Senate Democrats at the time tried to destroy her reputation based on her Catholic faith and predicted they would do so again, calling it a “shameful exercise of religious bigotry.”

“Let me be clear: Democrats’ expected attempts to derail this process, along with their contempt for Judge Barrett and her faith, will not impede this nomination,” Cruz said.

Cruz previously urged Trump to announce a nominee as soon as possible. Appearing on Fox News on the night of Ginsburg’s death, Cruz told Sean Hannity that once Trump named a successor, he and his fellow Republican senators should confirm the nominee before Election Day.

“A 4-4 court that is equally divided cannot decide anything, and I think we risk a constitutional crisis if we do not have a nine-justice Supreme Court, particularly when there is such a risk of contested litigation and a contested election,” he said.

Cruz has authored a book on the importance of the Supreme Court that will publish a week from Tuesday called “One Vote Away: How a Single Supreme Court Seat Can Change History.”

Cruz has a connection to Barrett; both did legal work for former President George W. Bush on the contested 2000 recount in Florida.

While Cruz was on Trump’s list of potential nominees, he suggested after the early September announcement that he was not interested in filling a vacant seat.

“It’s humbling and an immense honor to be considered for the Supreme Court,” Cruz said. “In the Senate, I have been blessed to lead the fight to preserve our constitutional liberties — every day, to defend the rights of 29 million Texans — and I look forward to continuing to do so for many years to come.”

Barrett received praise from Gov. Greg Abbott, who said in a statement that “her proven legal brilliance is matched by her exceptional character and unflinching commitment to the U.S. Constitution.”

Democrat MJ Hegar, who is challenging Cornyn for his Senate seat, tweeted that if Cornyn and other Republicans can rush to confirm Barrett, they should have been able to work to pass a COVID-19 relief bill.

“Instead they’re pushing their partisan agenda to strip us of our health care,” Hegar tweeted.

A Texas-led lawsuit to end the Affordable Care Act, Obama’s health care law, has a hearing before the Supreme Court on Nov. 10. Attorney General Ken Paxton, who led a team of red states in filing the suit in 2018, said in a statement Saturday that Trump “made an exceptional selection” with his nomination of Barrett.