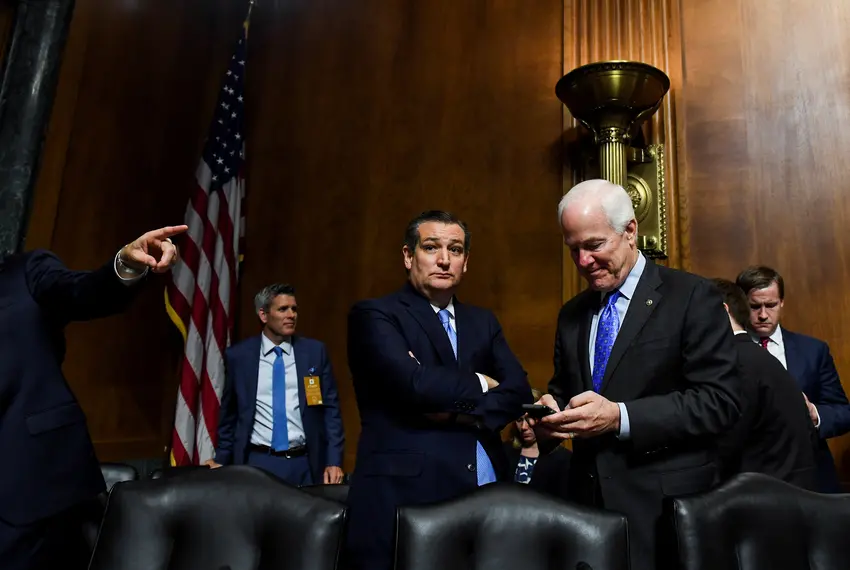 For Democrats at the tail end of Republican President Donald Trump’s first term, it was the nightmare scenario they’d long been dreading.

The GOP-controlled Senate has displayed in recent years a cutthroat approach to moving judicial appointments through the chamber. Republicans hope to secure a conservative approach to Supreme Court rulings for a generation.

Texas’ two senators — who will likely be tasked with the confirmation of Ginsburg’s successor — were quick to issue statements commemorating her sweeping influence on American legal life. Both men also made clear that confirming her replacement either in the 45 days before Election Day or before the next inauguration was immediately on their minds. Four years ago, both men strongly opposed confirming Merrick Garland, the nominee proposed by President Barack Obama as a replacement for Justice Antonin Scalia. Scalia died more than eight months before the 2016 presidential election.

On Friday night, U.S. Sen. Ted Cruz called for an urgent confirmation during an appearance on Fox News. U.S. Sen. John Cornyn did not comment directly, instead retweeting a quote from Senate Majority Leader Mitch McConnell that said, “President Trump’s nominee will receive a vote on the floor of the United States Senate.”

Both senators serve on the U.S. Senate Judiciary Committee, which means that the eventual nominee will be called before them to testify.

Republicans have a 53-47 majority in the upper chamber.

Trump added Cruz earlier this week to a list of prospective Supreme Court nominees, should a vacancy emerge. Cruz immediately made public his aversion to serving on the court.

Cruz, a former Texas solicitor general, told Sean Hannity on Friday night that Trump should nominate a successor to the Supreme Court next week, urging the Senate to confirm that person before Election Day.

“The court — we are one vote away from losing our fundamental constitutional liberties, and I believe that the president should next week nominate a successor to the court, and I think it is critical that the Senate takes up and confirms that successor before Election Day,” Cruz said. “This nomination is why Donald Trump was elected. This confirmation is why the voters voted for a Republican majority in the Senate.”

When Scalia died unexpectedly in February 2016, Cruz reacted within hours as well. But that time, when Obama was in office, he called for a delay in nominating a successor.

At a 2016 GOP presidential primary debate, Cruz said that it had been 80 years since a Supreme Court justice was nominated and confirmed in an election year as logic for his opposition to an Obama appointee.

“There’s simply just too much at stake to leave the decision in the hands of a president who is headed out the door,” Cornyn said on the Senate floor in March 2016, toward the end of Obama’s second term.

In a follow-up op-ed, he clarified that this position was rooted in part in the fact Republicans had recently taken control of the chamber.

“The American people made clear that they wanted a check on the Obama administration when they put Republicans in charge of the Senate in November 2014,” he wrote. “Now, we have an obligation — and full constitutional authority — to use that mandate from the people for issues that matter most to this country. And that includes the direction of the Supreme Court.”

On average, recent confirmations to the court have taken well over two months — a timeline that would put the Trump administration after the November election, even if officials move quickly.

Among recent Supreme Court appointees, Ginsburg herself had the fastest path from nomination to final Senate approval: just 42 days, according to the Congressional Research Service.

And there are questions over whether McConnell will have the votes to move the nomination. At most, he can lose only three Republicans, as Vice President Mike Pence could serve as a tie breaker on a 50-50 split.

Ginsburg’s passing could have sweeping effects on the already turbulent Texas political landscape.

No race will feel the consequences on the scale of Cornyn’s bid for a fourth term. His challenger, Democrat MJ Hegar, criticized him Friday for tweeting McConnell’s quote about voting on a Trump nominee.

“It took @JohnCornyn less than two minutes to fall in line with Mitch McConnell. The Supreme Court is on the ballot,” she tweeted.

Cornyn is an established conservative, particularly on social issues like abortion. Hegar is firmly in the abortion-rights camp. One of the groups most credited with securing her the nomination is EMILY’s List, an influential national group that works to elect Democratic women who support abortion rights.

As it stands, most Texas political insiders — even optimistic Democrats — say Cornyn is one of the few points of stability in the Texas Republican sphere. From the beginning of the cycle, Cornyn drew lessons from Cruz’s near-loss last cycle and took little for granted.

At first blush, a Supreme Court fight could benefit both candidates. Cornyn may see a reinforcement of enthusiasm of the expansive anti-abortion community in Texas. On the other hand, a nationalized last-ditch Democratic bid to pick up as many Senate seats as possible and send a message to Senate Republicans could lead to a fundraising boon for Hegar.

Two of the state’s most prominent Democrats, U.S. Rep. Joaquin Castro and former U.S. Housing and Urban Development Secretary Julián Castro, took to Instagram Live with their reactions and singled out Cornyn.

The San Antonio siblings also added that this decision will have an impact on issues like health care and racial equity.

For the most part, though, Texas political operatives who spoke to the Tribune on Friday night were completely flummoxed with the gravity of the political ramifications and legal consequences ahead and were reluctant to weigh in with sweeping speculations or analysis.

“Tomorrow, we will be strong, and we’ll fight to honor her legacy and protect our democracy — just as Justice Bader Ginsburg fought all the way to the end,” she continued. “But tonight — let us reflect on the life of an incredible woman who we were lucky enough to share time with.”