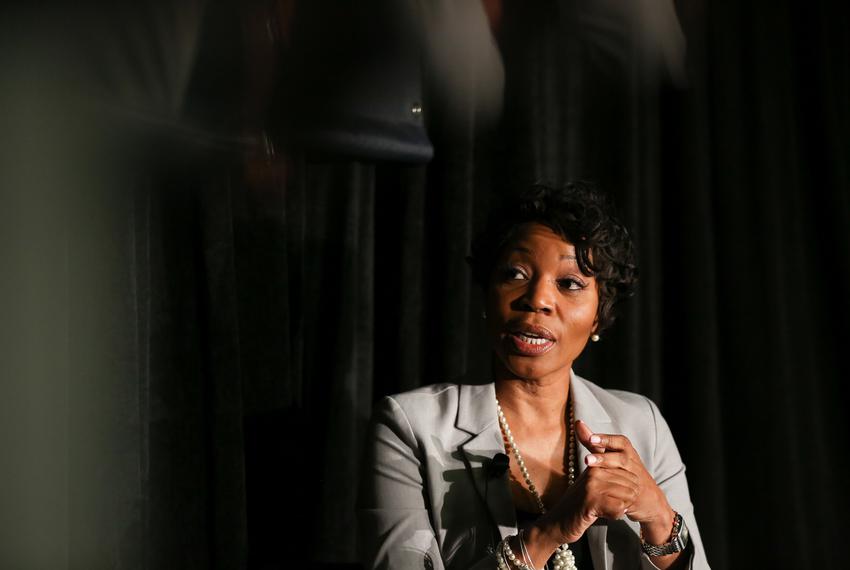 Dallas Police Chief U. Reneé Hall is stepping down from her post as the city’s top cop in November. Credit: Qiling Wang for The Texas Tribune

Dallas Police Chief U. Reneé Hall resigned her post Tuesday but will remain the city’s top cop through the end of the year, according to a statement from Dallas City Manager T.C. Broadnax. Hall was heavily criticized by six City Council members after anti-police brutality protests in Dallas in the wake of George Floyd’s killing. Hall’s resignation letter didn’t reference such criticisms.

Instead, her resignation says she has received “a number of inquiries about future career opportunities.” Hall said that, for now, she would keep her next step “confidential.”

“These past three years have been saturated with a series of unimaginable events that individually and collectively have never happened in the City of Dallas,” Hall wrote. “I am proud that this department has not only coped with an unthinkable series of events, but we also managed to implement critical reforms.”

The Dallas Police Department was criticized for its use of force during protests at the end of May and start of June. An investigation from The Dallas Morning News reported that police officers used pepper-ball launchers against peaceful protestors. A federal judge later temporarily banned the city of Dallas from using tear gas and other so-called less-lethal weapons against peaceful crowds.

By mid August, Hall presented a report of her department’s handling of the protests that found planning and communication problems among police officers. The report also proposed changes in who can authorize use of tear gas, training for mass arrests and ensuring the use of police body cameras.

“Whatever we do as a police department, we’ll acknowledge it, we’ll fix it, and move forward,” Hall said in a phone interview with The News. “The fact we have changed some general orders in line with our less-than-lethal force acknowledges we could have done something differently.”

But in a special meeting of the Dallas Public Safety Committee in August, six council members criticized the transparency of the report and Hall’s leadership.

“I’m very concerned with how this all happened, and what I’m seeing is a lack of leadership,” said council member Cara Mendelsohn, according to The News. “This has been an embarrassment to our city.”

Dallas Mayor Eric Johnson said in a statement released Tuesday evening that he has not spoken with Hall, but he “was was not terribly surprised by it considering the recent public statements of my City Council colleagues.”

“I know that people who commit themselves to careers as police officers face immense challenges and must be willing to make tremendous sacrifices. We demand much from them and especially from our police leaders — and rightfully so because the stakes are incredibly high,” Johnson said. “On top of those demands, Chief Hall had the burden and the distinction of being the first woman — a woman of color, no less — to serve as the police chief in Dallas.”

Broadnax said in a statement Tuesday evening that Chief Hall originally planned to leave by Nov. 10, but he asked her to stay until the end of the year.

“I am extremely grateful to Chief Hall for extending her time in Dallas. This year has been tumultuous and uncertain,” Broadnax said. “A few more months of her leadership are key for several projects and for a seamless transition within the police department.”