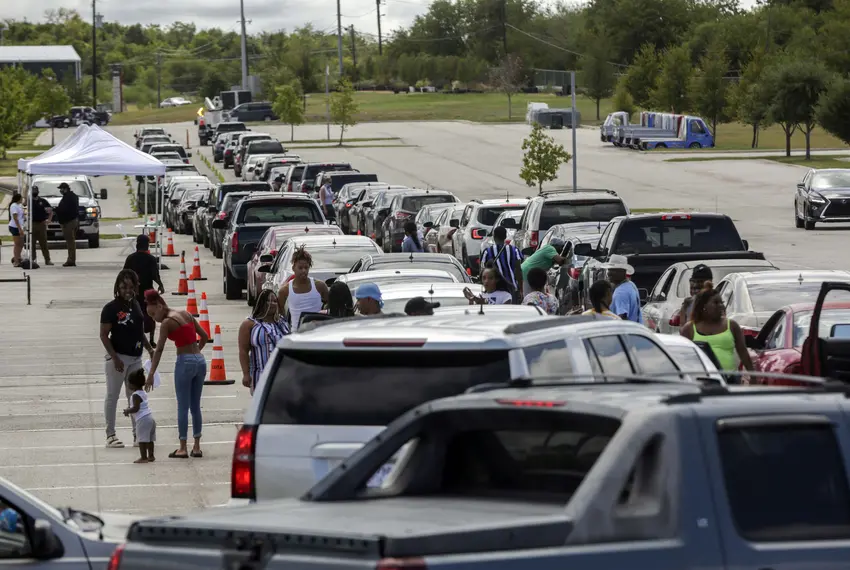 After battering the Gulf Coast at about midnight Thursday, Hurricane Laura has been downgraded to a Category 2 storm as it moves away from the Texas-Louisiana border.

About 70,000 Texans are out of power in the East Texas counties of Jefferson, Orange and Hardin counties, local media reported. The storm moved ashore in Cameron Parish, Louisiana — which borders Texas — around midnight Thursday after almost strengthening into a Category 5 storm, according to the National Hurricane Center.

But as the morning wore on, officials in Southeast Texas were sounding optimistic that their corner of the state had escaped the worst of the hurricane’s impact.

“I’m very pleased to report the damage to Southeast Texas was minimal. We really dodged a bullet,” state Rep. Dade Phelan, a Republican who represents part of Jefferson County and all of neighboring Orange County, tweeted Thursday morning. “Prayers for our friends in the Southwest Louisiana.”

Laura’s size and strength brought warnings from the hurricane center of “catastrophic” devastation from storm surge and wind damage on both sides of the Texas-Louisiana border.

The storm was a Category 4 hurricane as it swept ashore. It had intensified as it neared the Gulf Coast and at 10 p.m., the hurricane center reported that the storm’s maximum sustained winds had reached 150 mph — just 7 mph short of becoming classified as the most dire level of hurricane. Despite the downgrade Thursday morning officials are expecting the hurricane’s storm surge to reach more than 30 miles inland to I-10 between Beaumont and Lake Charles, according to CNN. The storm is expected to remain a hurricane as it moves through Louisiana. Just after 7 a.m. Central Time, the National Weather Service reported wind speeds are still reaching up to 100 mph and heavy rain and possible flash flooding is possible in areas away from the coastline.”

Cameron Parish is on the other side of the Texas-Louisiana border from Jefferson County, which is home to Beaumont and Port Arthur. Hurricane Laura could mark the latest in a string of devastations for Texans in that region, where some are still recovering from damage caused by Hurricane Harvey in 2017.

The full scope of damage likely won’t be known until later Thursday because the storm is expected to continue moving inland. Storms of Laura’s strength can severely damage buildings and homes, down power lines, and snap or uproot most trees, according to the hurricane center. On Tuesday, Gov. Greg Abbott warned Texans in the area about the storm’s dangerous winds. And on Wednesday, he told Texans that the state would not be able to rescue people caught in the hurricane’s path from Wednesday evening until 9 a.m. Thursday.

“We don’t know exactly how it is going to affect us. We are watching it, letting it pass and as soon as it goes out we are going to see what we can do,” Beaumont Mayor Becky Ames told KFDM as the hurricane was making landfall in Louisiana.

Ames said it was still early and that not much had really changed in the city’s response but that there was “maybe a bit of a sigh of relief” as the storm came in. She said at one point they feared being directly hit by a Category 4 or 5 storm.

Hurricane Laura is also expected to cause flooding and damage from storm surge, which pushes water from the coast inland. From Freeport to the Texas-Louisiana line, parts of the coast are expected to experience storm surges between 2 and 15 feet, according to an advisory Wednesday night from the hurricane center.

“The combination of a dangerous storm surge and the tide will cause normally dry areas near the coast to be flooded by rising waters moving inland from the shoreline,” the advisory warned.

Multiple Texas cities and counties issued mandatory or voluntary evacuations in recent days, with thousands of evacuees heading to Dallas, San Antonio and Austin, among other places. But thanks to the ongoing coronavirus pandemic, state and local officials have been scrambling to shelter evacuees, shifting as much as possible from emergency shelters to government-paid hotel rooms.