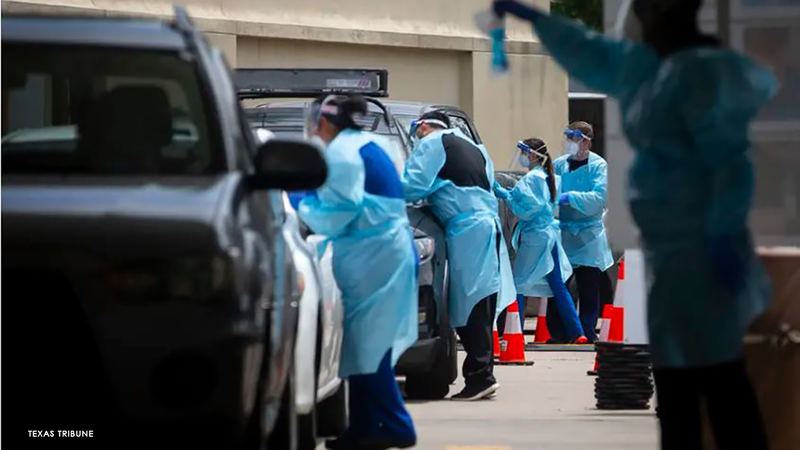 After plummeting for days, the number of COVID-19 tests reported in Texas suddenly jumped by 124,693 on Thursday, which state health officials said was a result of coding errors and a system upgrade.

Backlogs at a hospital lab and a commercial lab accounted for most of the tests, which could not be added to the state’s official tally until the coding errors had been fixed, said Lara Anton, spokesperson for the Texas Department of State Health Services.

Of the 124,000 tests reported on Thursday, approximately 95,000 were from a lab that served several hospitals, Anton said, adding that the lab sent files containing an error in one of the data fields, which DSHS’ electronic system could not read.

DSHS doesn’t know when the tests were actually conducted and is working with local health departments to find out, she said.

Local media reported that a similar “data dump” happened in Florida this week, with around 14,000 tests added from one lab in Miami.

DSHS gets data from labs across the state in a variety of formats, from electronic reports to old-fashioned faxes, then uploads it all into the National Electronic Disease Surveillance System run by the U.S. Centers for Disease Control and Prevention.

But DSHS’ system wasn’t set up to handle the massive volume of test results it’s receiving during the pandemic, Anton said, adding that it would typically receive about 1,200 reports a day from labs across Texas before the pandemic.

The state’s maximum capacity for processing electronic lab reports was 48,000 a day, but at the height of the pandemic in July, it frequently received more than that, Anton said.

“So we started to have a backlog,” Anton said.

When DSHS upgraded its lab reporting system on Aug. 1, giving it the capacity to process more than 100,000 electronically-submitted test results per day, some of those backlogged tests also were counted for the first time, Anton said.

The sudden increase in the number of tests made Texas’ seven-day positivity rate drop from a record-high 24.5% to 16%. The positivity rate is the ratio of positive cases to the number of tests conducted, a metric that Gov. Greg Abbott has been watching closely. In May, Abbott said that if it went over 10%, it would be considered a red flag; the state has exceeded that mark every day since June 22.

The number of reported tests has gone down quicker than the number of new infections reported. A relatively low number of tests and large percentage of positive results worry health experts, suggesting inadequacies in the surveillance effort.

The coronavirus remains particularly active in predominantly Hispanic counties of South Texas. Brownsville-Harlingen, Eagle Pass, Rio Grande City, Corpus Christi and Laredo have the highest rate of new coronavirus cases per capita in the country, according to an analysis by The New York Times.

Abbott said on Thursday that one possible reason that testing is down statewide is because of the closure of some temporary testing sites launched in July that targeted various hot spots. State and local officials in Texas have also described a drop in demand for COVID-19 tests.

Anton said community testing sites currently have “plenty of capacity” and no lines.

Whether because of human error, shifting benchmarks or bureaucratic changes, it’s not the first time that Texas officials have corrected their data since the beginning of the pandemic. Almost every major data point has come with caveats, sometimes blurring for days the big picture of the pandemic in Texas.

Overall, the state has earned an A for quality of its data from The Atlantic’s COVID Tracking Project, one of the most robust U.S. resources on the virus.