Home Latest News In a first for major leagues since pandemic, FC Dallas soccer team to play in front of thousands of fans
Latest NewsTexas News

In a first for major leagues since pandemic, FC Dallas soccer team to play in front of thousands of fans 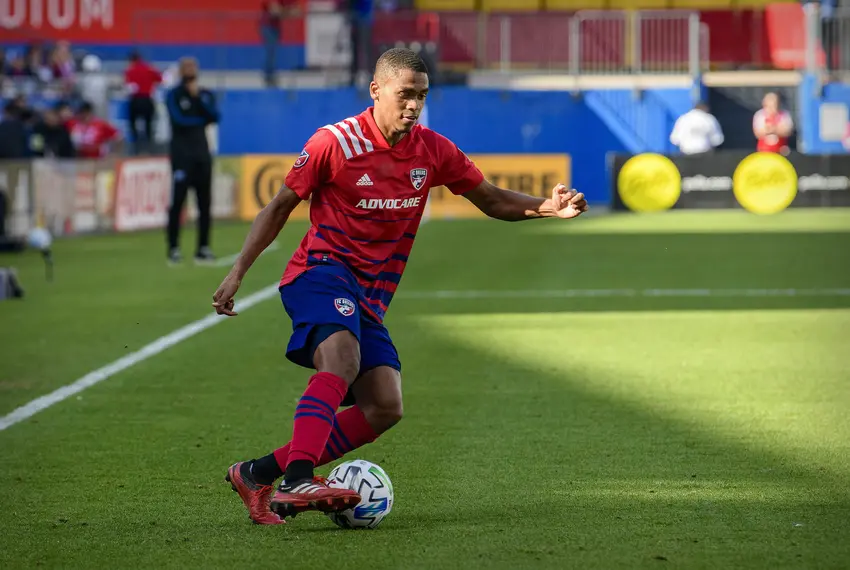 The coronavirus pandemic ground American professional sports to a halt in March, causing leagues to cancel games and, later, play in empty arenas and stadiums. But on Wednesday, fans will return to live major league sports in Texas: FC Dallas, the Major League Soccer team, will host Nashville SC in a match in front of potentially thousands of spectators.

The game appears to be the first major league sporting event that will be played in front of fans in the United States since the early part of the pandemic. The other big professional team sports leagues currently in action — the National Basketball Association, Major League Baseball and the National Hockey League — have been playing in front of empty seats.

A maximum of 5,110 fans will be able to attend the game, filling about 25% of the 20,500 seats in the team’s Toyota Stadium in Frisco. That capacity level is well below Gov. Greg Abbott‘s 50% limit for venues in his most recent executive order governing sporting events.

The MLS suspended its season on March 12, citing guidelines from the Centers for Disease Control. It returned to action in July for the MLS is Back Tournament, which was played at the Walt Disney World resort in Florida. FC Dallas did not participate, however, because about 12 players and one coach tested positive for coronavirus before their first match.

Officials say the stadium will be prepared to open safely and protect fans and staff from the coronavirus. Attendees will be assigned into one of two zones and will be separated by a number of seats in order to follow proper social distancing protocols. The stadium is also moving to minimize interactions between attendees and staff by going cashless and reducing the exchange of paper by using digital tickets. The team will be requiring the use of face masks from the moment people step onto the property.

Before buying tickets, fans will also be required to sign a liability waiver in which they agree not to sue if they are exposed to COVID-19.

Gina Miller, the team’s vice president of media and communications, said players, staff, trainers and other personnel have been instructed on best practices and are being tested every other day, as recently as Tuesday.

“We polled our fans and more than half of [900] said that they would feel comfortable attending magic Toyota Stadium,” Miller said. “They indicated that what they missed more than anything was that sense of community, that camaraderie, that soccer experience.”

Miller added the team and staff will be tested again Thursday morning.

“I just think it’s going to be a proud moment for our entire organization,” Miller said. “With so many of us really being challenged right now by being isolated or socially distant or not being able to experience some of those things that we love to experience in life, we hope to be able to provide that great moment of entertainment and respite.”

The FC Dallas game will mark the resumption of the MLS season, but the league says the majority of its games will continue to be played without fans. In an announcement detailing the upcoming schedule, the league said it will work with local health authorities “on a plan for limited capacity at certain games where allowed.”

Not all fans plan to participate, however. The Dallas Beer Guardians, an FC Dallas supporters group, said it won’t be hosting tailgates or organizing watch parties upon the team’s return.

“We miss being in the stadium as much as you do, but each of us feel we have a responsibility to our families and to the public health to continue to distance until the COVID-19 crisis is under control,” the group said in an open letter to its members.

Sarah Deemer, an assistant professor at the University of North Texas, said she believes the team’s move to open the stadium up for fans is irresponsible. She lived in the Dallas area for about four years and she could be seen at nearly every game throughout the season. Today, she would not even consider stepping into the stadium during the pandemic.

Live sporting events have been a major point of debate in recent days as leagues look for ways to press on despite widespread concerns from public health officials about large public gatherings. Abbott first made it possible for Texas sports stadiums to open at limited capacity on May 31. And while professional leagues have opted to keep fans away until now, Abbott has been predicting for months that college football will return in the fall. This week, he reiterated that he hopes that happens.

Two major college football conferences — the Big 10 and the Pac 12 — moved to cancel their fall seasons Tuesday, citing the health risks for the athletes and their communities. Faced with the possibility of the University of Texas at Austin playing football games with fans in the stands this fall, Dr. Mark Escott, Austin’s interim public health authority, recently warned that COVID-19 cases could multiply at games.

​But even as hospitalizations reportedly decline, other stats have raised concern about the spread of the virus in the state. The percentage of coronavirus tests over the past week yielding positive results has climbed to 22.2%. Earlier in the pandemic, Abbott pegged any positivity rate above 10% as a red flag.

In an interview with the Wall Street Journal in late July, Anthony Fauci, the nation’s top infectious disease doctor, said stadiums should implement social distancing measures and require masks in order to welcome fans back safely, adding that outdoor stadiums are a better option than having people indoors.

“I think they would have to do everything they possibly can to safeguard the health and the welfare of people,” he said. “Namely, they’ve got to have a considerable degree of distancing.”

He also said people who are older or who have health problems should decide carefully about attending games.

“I have a daughter who’s perfectly healthy,” Fauci said. “If she loved baseball the way I love baseball and said, ‘Dad, what do you think? I want to go in, I’m going to wear a mask and I’ll be physically distant.’ Would I tell her absolutely don’t go? No, I don’t think so. I would let her make up her own mind.”

Some fans indicated they will be willing to take the risk. Luis Dollar, president of FC Dallas support group El Matador, said the team has been in contact with the group for the past few months and had already shared their plans on welcoming fans back, reassuring them about their safety measures. He added that he expects the majority of the group’s active members will be going to see the game.

“At the end of the day, it’s going to come down to Wednesday night, and whether or not it runs smoothly,” Dollar said. “As much as we love football, life is a little bit more important.”

After seeing how FC Dallas enforces masks and manages the guests tomorrow, he will decide whether he will attend the rest of the season, he said.