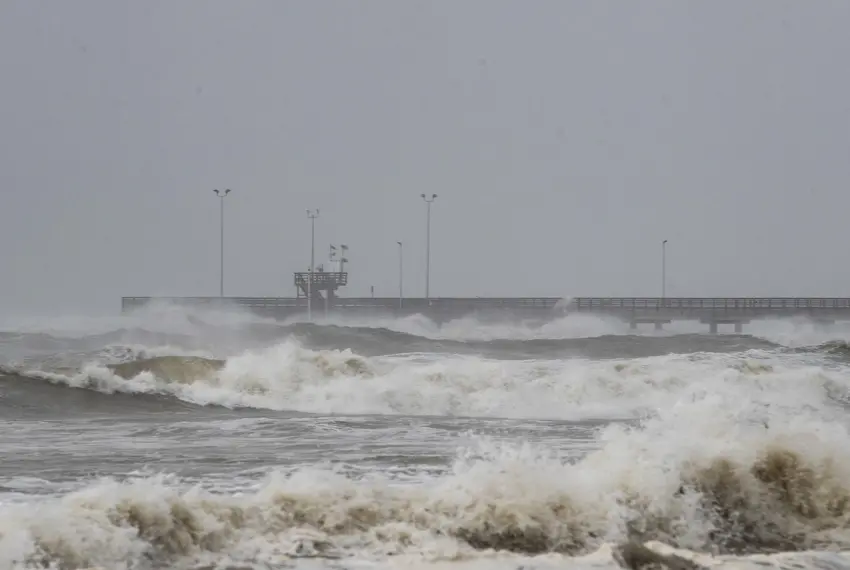 Texans in the Rio Grande Valley and along the Coastal Bend continued to face the impact of now-Tropical Storm Hanna on Sunday.

The storm, which made landfall as a Category 1 hurricane Saturday evening at Padre Island, packed sustained winds as high as 90 mph and caused power outages and flooding. Rain bands from the hurricane will linger over much of the region all day Sunday.

As of 1 a.m. Sunday, Hanna had weakened into a tropical storm and was moving toward northern Mexico, according to the National Weather Service.

Liz Sommerville, a senior forecaster for the National Weather Service, told the Caller-Times that there is a chance for severe thunderstorms that could bring strong winds, heavy rain and low-line, coastal flooding in the region all day.

On Sunday, Gov. Greg Abbott urged Texans to remain vigilant given the threats of flash flooding. “Any additional rainfall will exacerbate these threats, but the State of Texas is ready to respond and protect our fellow Texans,” Abbott said in a statement.

In a separate statement Sunday, Abbott announced that the Federal Emergency Management Agency and President Donald Trump have approved a federal emergency declaration in response to Hanna. The declaration allows for some federal assistance and reimbursement for evacuation efforts and shelter support.

Coastal flooding that could reach up to two to three feet will be especially evident in the northern and southern parts of Port Aransas, Sommerville said.

A tornado watch is in effect in Corpus Christi, Kingsville, Falfurrias, Laredo, Zapata, McAllen and Brownsville until 10 p.m. Sunday.

The storm, which landed 15 miles north of Port Mansfield, caused flooding along the coast, and the energy provider for the region reported more than 140,000 outages as of Sunday morning.

Less than an hour before Hanna’s landfall on Saturday, Abbott called for residents not to forget the preexisting threat of COVID-19 in the face of the natural disaster.

“Any hurricane is an enormous challenge,” Abbott said in a news conference on Saturday afternoon. “This challenge is complicated and made even more severe seeing that it is sweeping through an area that is the most challenged area in the state for COVID-19.”

Abbott announced that the state’s emergency response would include 17 COVID-19 mobile testing teams focused on shelters and 100 medical personnel provided by the Texas National Guard. For people who leave the area, the American Red Cross will be providing hotel vouchers in San Antonio’s Freeman Coliseum. The governor also issued a disaster declaration for 32 counties and a federal emergency disaster declaration request.

“We will be responding in the way that we typically respond to hurricanes, but on top of that we will respond to the COVID challenges,” Abbott said Saturday.

One of those challenges could be how to handle an emergency in COVID-19 hot spots, such as nursing homes.

“We worked very close with all of the nursing homes through the testing and the cleaning,” said Texas Division of Emergency Management Chief W. Nim Kidd. “We know exactly where they are, how many residents they have. If we need to evacuate a nursing home at this point, we still have all the resources that we’ve had in every hurricane season to do that. The difference will be that we will be wearing more P.P.E. than we’ve had in the past.”

The National Hurricane Center previously issued a hurricane warning for a section of the Texas coast from Port Mansfield to Mesquite Bay — an area that includes Corpus Christi Bay, Aransas Bay and Padre Island.

The agency also issued a warning of storm surge for a wider area, including the coast from Port Mansfield to Sargent. Looking to assist, Abbott had already dispatched emergency resources to the Coastal Bend region and to the Rio Grande Valley, where the governor is simultaneously sending more than 1,000 medical personnel to help fight the novel coronavirus, which has devastated South Texas.

Corpus Christi had already decided to close a drive-thru coronavirus testing site until at least Tuesday.

It was a stark reminder for a region that has been a coronavirus hot spot, adding well over 2,000 COVID-19 cases during each of the first two weeks of July. At least 2% of the population was infected, or one in every 50 people. Now the region is preparing for a storm in the middle of a pandemic.

The virus wasn’t always spreading so rapidly in Nueces County, which reported fewer than 100 cases and three deaths before Texas’ stay-at-home order expired April 30. But people spent the summer gathering at beaches and restaurants in the popular beachfront community, and now the county has seen a spike in cases.

Just last Friday, Nueces County Medical Examiner Adel Shaker was shocked to learn that a baby boy, less than 6 months old, had tested positive for COVID-19, the disease caused by the new coronavirus, and died shortly after.

Storms are nothing new for the Coastal Bend region. McComb said some have helped the community grow closer. Nueces County Judge Barbara Canales agreed and said the region is ready for this storm.

“I join Mayor McComb in saying there is no doubt that we have a tremendous experience when it comes to these kinds of storms,” Canales said. “Where coronavirus may have caught us off guard, a hurricane does not. We know what to do. We know how to help.”

McComb underscored the reality of the coronavirus when warning residents who live in flood-prone neighborhoods about the prospect of evacuation.

“Take several masks with you because you might be there a couple days if you’re in a flood area,” McComb said. “We don’t want to expose anyone during this storm. … Even when you’re in the house, I recommend wearing a mask if you’re in crowded conditions.”

With 1,000 new coronavirus fatalities in Texas in just 6 days, the state’s death count is rising faster