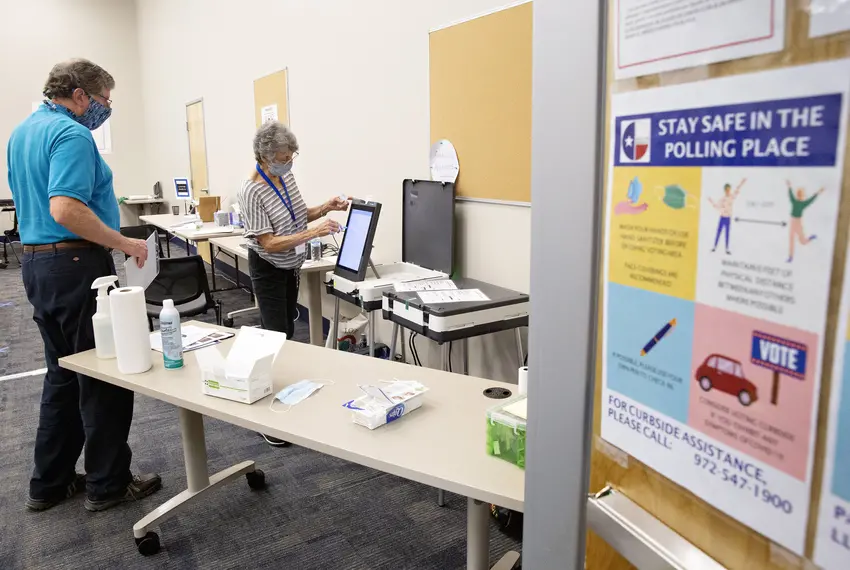 Connie Ford explained the curbside voting system to poll worker Jeremy Matthews last month at the Collin County Elections Department. The polling site had new signs to inform voters and employees of how to reduce the risk of spreading COVID-19 while voting. Photo credit: Shelby Tauber for The Texas Tribune

Polls open in July. Voters wearing masks and gloves. Texans will be voting in the middle of a pandemic on Tuesday in a runoff election originally scheduled for May.

Here’s what to watch for when the results come in.

1. A race to face off against John Cornyn

Whoever wins the U.S. Senate Democratic primary runoff — a race between Air Force veteran MJ Hegar and and Dallas state Sen. Royce West — will face an uphill battle against U.S. Sen. John Cornyn, R-Texas, who will have a huge financial advantage in a traditionally red state.

As tightening polls at the top of the state ticket have given some Texas Democrats hope for November, the race between Hegar and West has become contentious. With Hegar leading in the polls, West has amped up his questioning of Hegar’s party credentials and harnessed the energy over police misconduct to energize his campaign.

If Super Tuesday is any indication, West will perform well in his hometown of Dallas, so the question is whether Hegar can overcome that advantage in other parts of the state.

Working in her favor are outside groups like EMILY’s List and the Democratic Senatorial Campaign Committee— plus Hegar’s own campaign — that put up a combined $2 million to mount a massive television ad campaign on her behalf. The spending differential between the two campaigns is approximately $85 to $1.

2. If a Republican wins Tuesday, is that a win in November?

In two GOP congressional runoffs, the winners will be clear favorites to become their districts’ next members of congress.

In District 17, which includes Waco, Bryan-College Station and rural parts of east central Texas, former U.S. Rep. Pete Sessions is seeking a return to Washington. He represented Dallas in the U.S. House until losing his seat in 2018 to Democrat Colin Allred. Now he has moved 100 miles south and faces local businesswoman Renee Swann, who has the support of retiring U.S. Rep. Bill Flores, R-Bryan.

In the Texas Panhandle, two outspoken conservatives will vie for the nomination in one of the state’s reddest U.S. House districts. One of the candidates, Ronny Jackson, the former White House doctor, has the backing of President Donald Trump. He’ll square off against Josh Winegarner, a veteran agriculture expert and lobbyist.

Trump had a near-perfect endorsement record in Texas on Super Tuesday. In several primaries, his nod either helped land a candidate above the runoff threshold — as in Jackson’s case — or cement the candidate’s name on the November ballot. (With Trump’s poll numbers suffering, however, it’s unclear if his endorsement will carry the shock and awe it did several months ago.)

Another notable race for a safe GOP seat is the runoff for state House District 60, where Jon Francis, son-in-law of Farris and JoAnn Wilks, will face off against the Gov. Greg Abbott-backed Glenn Rogers. The Wilkses — brothers Farris and Dan and their extensive families — have doled out millions supporting candidates and causes that reflect their hardline political ideology anchored in faith, freedom and guns.

In turn, Francis, who works at Wilks Development, a real estate development and investment company, has received the backing of hardline conservative leaders and groups, including Empower Texans and outgoing state Rep. Jonathan Stickland, R-Bedford.

But in four other prominent congressional races, the parties are picking their candidates in what are expected to be competitive seats this fall.

In another race that has gained Trump’s attention, the president has tried to tip the scales in favor of Tony Gonzales in the 23rd Congressional District, a perennial swing seat represented by outgoing U.S. Rep. Will Hurd, R-Helotes. Gonzales will face the U.S. Sen. Ted Cruz–backed Raul Reyes for a chance to take on Gina Ortiz Jones, the Democratic nominee.

In Austin, Mike Siegel hopes to overtake Democratic rival Pritesh Gandhi for a chance to take on U.S. Rep. Michael McCaul, R-Austin, later this year. Siegel won the Democratic nomination in 2018 and came within 5 percentage points of besting McCaul in a seat that has long been in Republicans’ grip.

Another likely competitive race this November has quickly transformed into an expensive one: Kathaleen Wall, a prominent GOP activist-donor, has spent more than $8 million, most from her own pocket, for the nomination in the 22nd Congressional District near Houston. Wall is up against Fort Bend County Sheriff Troy Nehls, who won the most votes on Super Tuesday. The winner will face Democrat Sri Preston Kulkarni in November in a race to replace retiring U.S. Rep. Pete Olson, R-Sugar Land.

For Republicans in Texas, Robert Morrow advancing to the GOP primary runoff for a seat on the State Board of Education was nothing short of frightening. Morrow is perhaps best known for wearing a jester’s hat and holding incendiary signs outside political events around Austin. He also has a history of making racist, sexist and profane statements. On the day before the runoff, his account was restricted on Twitter.

Still, he finished first in the three-way primary on Super Tuesday to fill the seat of retiring member Ken Mercer. All Republicans on the board quickly teamed up to rally around his opponent, Lani Popp.

Republicans were puzzled and dismayed that Morrow, who doesn’t have much in terms of a formal campaign, endorsements or money, advanced as far as he did. Even Morrow himself has admitted that he thought his chances of winning the runoff were slim.

But if he wins, Morrow, a self-described performance artist who was ousted after a brief stint as chair of the Travis County Republican Party, could have a voice on adopting school textbooks and determining the curriculum for millions of Texas children.

Backing Popp, a Northside ISD speech language pathologist, are Abbott and the Travis County GOP, which issued an anti-endorsement of Morrow in January. The winner in the GOP runoff Tuesday will face Texas State University English professor Rebecca Bell-Metereau, a Democrat, in November’s general election.

Texas progressives are determined to have a political comeback after a good chunk of their candidates lost their primary races in March.

In New York, voters were primed to welcome a new, diverse set of candidates after nearly a month of protests over the killing of George Floyd in Minneapolis police custody. In Texas, at least three progressive challengers have mounted aggressive campaigns against two moderate Democrats in the northern part of the state.

Siegel’s Austin congressional bid has received the endorsements of national progressive leaders like U.S. Sen. Bernie Sanders of Vermont. At the local level, José Garza, who has been endorsed by Julián Castro, U.S. Sen. Elizabeth Warren of Massachusetts and Sanders, is challenging Travis County DA Margaret Moore in a nationally watched race.

And state Sen. Eddie Lucio Jr., D-Brownsville, who has been in the Texas Senate for nearly three decades, faces a stiff challenge from Sara Stapleton-Barrera. Lucio, who has long bucked his party on votes concerning abortion, has enjoyed the support of Republican megadonors and has been aggressively campaigning on his Senate seniority over the past few weeks.

6. What will the election’s impact be on health in Texas?

Prominent state Democrats and civil rights activists have repeatedly called on the courts to expand voting by mail to all Texans because of health concerns. All of their attempts have failed.

When he issued a statewide mask mandate, Abbott excluded churches and people voting in the primary runoff elections. That means it will be up to people heading inside crowded polling places to decide whether to wear a mask.

Previously, the Texas secretary of state issued “minimum recommended health protocols” for elections, including a suggestion that voters bring their own hand sanitizer to the polls and that they “may want to consider” voting curbside if they have symptoms of the new coronavirus.

The guidelines come as Texans headed to the polls at high rates for the historically low-turnout runoffs. Through July 8, nearly 800,000 Texans had voted early — either in person or by mail; more than 482,000 people have voted in the Democratic Party runoffs, while more than 316,500 have participated in Republican runoff contests.

Still, in close races in Texas, the results may not be immediately known. Because of the number of voters casting mail-in ballots, the final results might not be tabulated for days. And in close race, it may not be clear who won by late Tuesday night or even Wednesday morning.

UT-Austin says it will keep “Eyes of Texas” as school song, but will rename buildings as Black students call for change