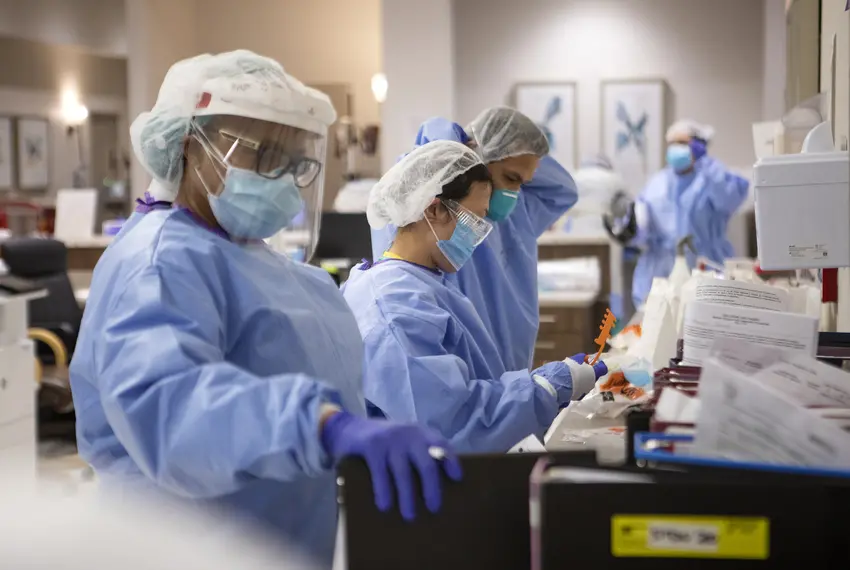 With the daily number of new coronavirus infections in Texas now exceeding that of most other states, experts say Texas has become a hot spot of the global pandemic and that more aggressive measures are needed to slow the virus’ spread.

Texas’ new confirmed cases of the coronavirus now make up around 14% of the U.S. total — measured by a seven-day average — a significantly higher proportion than its 9% share of the nation’s population. Since July 1, the U.S. has reported 358,027 new infections. Of those, 50,599 were in Texas.

On Tuesday, the Texas Department of State Health Services reported more than 10,000 new cases — representing nearly 20% of the nation’s new cases for the day. It could be a “catch-up” from the July 4 holiday, DSHS spokesman Chris Van Deusen said, noting that numbers reported Sunday and Monday were lower.

“There has never been a higher risk of getting COVID-19 in Texas,” the state’s public health agency wrote on Twitter on Tuesday.

New York and Florida are the only other states that have exceeded a daily 10,000-case mark since the beginning of the pandemic, though New York’s case count has fallen sharply since its April peak, with the state now averaging fewer than 700 daily new cases in July.

“We are going to be in a situation where we have to seriously consider sheltering in place again,” said Dennis Perrotta, a former Texas state epidemiologist. “What we have is a large amount of virus now circulating in a large number of areas, and simply wearing masks when you’re out isn’t going to cut it.”

The number of Texans being tested for the virus grew steadily in June, but the expansion of testing alone cannot account for the growth in new cases, said Dr. David Lakey, vice chancellor for health affairs and chief medical officer at the University of Texas System.

“If it were only that we were testing more, we wouldn’t be seeing these number of hospitalizations and ICU admissions,” said Catherine Troisi, an infectious disease epidemiologist at the University of Texas School of Public Health. On Wednesday, 9,610 people were hospitalized with COVID-19 in Texas.

An explosion of hospitalizations has strained hospitals around the state, particularly in the Rio Grande Valley.

The U.S. has reported more than 3 million coronavirus infections since the pandemic began, including more than 210,000 in Texas. But the extent of the virus’ spread remains unclear. The Centers for Disease Control and Prevention estimated in late June that more than 20 million people may have contracted the virus nationally, a figure roughly 10 times larger than the number of lab-confirmed cases at the time.

Public health researchers have pointed to various metrics as cause for concern in Texas’ efforts to contain the virus. First, the percentage of virus tests that come back positive has hovered between 10% and 15% since late June. The previous month, Gov. Greg Abbott said a rate over 10% would be a “warning flag.”

It’s one of several benchmarks that the state has blown past since Abbott laid out a plan in May that permitted the phased reopening of businesses in Texas. The governor has said he is monitoring the number of hospitalizations, the rate of positive viral test results and the seven-day average of new confirmed COVID-19 infections to guide Texas’ reopening efforts.

The White House and the CDC released guidelines for states’ reopening that included a 14-day downward trajectory of new virus cases or a 14-day decrease in the percentage of positive tests.

Instead, the number of new daily infections in Texas has grown steadily, reaching a seven-day average of 7,228 on July 7.

On June 22, Abbott said that if the three metrics he is monitoring were to double within a month, it would place Texas “in an urgent situation where tougher actions will be required.” On June 25, he reinstated a ban on elective surgeries in four metropolitan counties, then expanded it to four South Texas counties five days later to preserve hospital capacity. On June 26, he ordered bars to close and capped restaurant capacity at 50%, down from 75%. And last Thursday, with case counts continuing to climb, he issued an executive order requiring Texans in most counties to wear masks in public.

On Tuesday, two weeks after Abbott’s June 22 remarks, the number of hospitalizations and the weekly average of new cases had doubled.

“We started reopening, and we didn’t wait long enough to see what would happen with those first steps. This was totally predictable,” Troisi said, adding that any new measure, such as the mask order, will take at least two weeks to show effects. “If people are really wearing masks, that would go a long way, but I’m not sure that will happen.”

Chris Essig and Anna Novak contributed to this story.