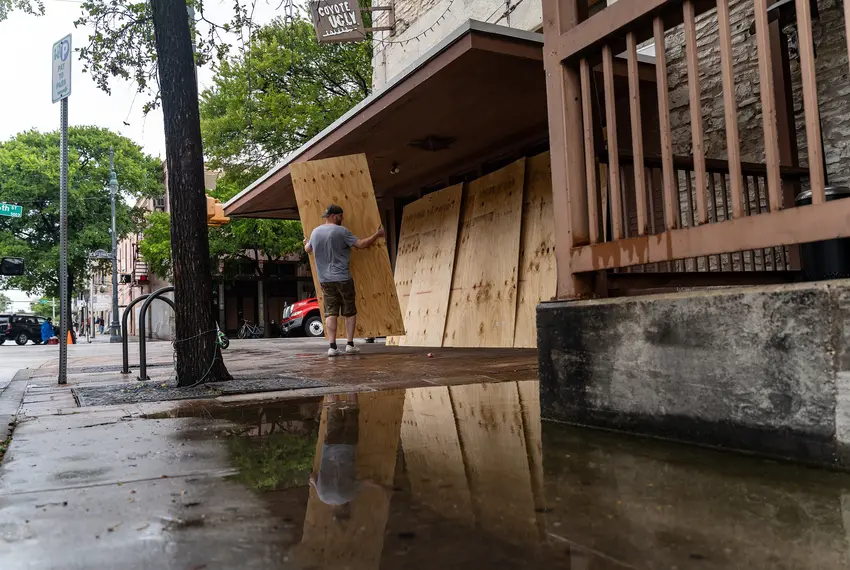 An employee boards up a bar on Sixth Street in Austin after Gov. Greg Abbott closed bars in Texas for the second time in three months because of the COVID-19 pandemic. Photo credit: Jordan Vonderhaar for The Texas Tribune

The lawsuit, first reported by the Austin American-Statesman, was filed in Travis County District Court by Jared Woodfill, a Houston attorney who has led previous legal efforts opposing Abbott’s other shutdown orders during the pandemic.

“Why does he continue unilaterally acting like a king?” Woodfill, former chair of the Harris County Republican Party, said of Abbott in an interview. “He’s sentencing bar owners to bankruptcy.”

Announcing the shutdown Friday, Abbott said the actions of his executive order “are essential to our mission to swiftly contain this virus and protect public health.”

Dozens of Texas bar owners — including those who run Machine Shed Bar & Grill in Kilgore, Shots and Crafts in Denton, and Big Daddy Zanes in Odessa — disagree, and they have positioned themselves in a legal standoff with the governor as hospitals across the state fill up with sick Texans due to the coronavirus pandemic.

The move Monday by bar owners also comes as millions of Texans are jobless, including many people who have applied for unemployment benefits but have not yet received them. The bar and restaurant industry has been hit especially hard. Nearly 800,000 workers in the restaurant industry have lost their jobs since March, according to the Texas Restaurant Association.

Abbott, who decided Friday to close down bars again to mitigate the spread of the coronavirus, has admitted few personal errors during the pandemic, but over the weekend he acknowledged he would like a do-over on the state’s bars.

“If I could go back and redo anything, it probably would have been to slow down the opening of bars, now seeing in the aftermath of how quickly the coronavirus spread in the bar setting,” Abbott said during an interview with KVIA-TV in El Paso.

In the lawsuit, the bar owners argue that their rights have been “trampled” by Abbott while “thousands of businesses are on the brink of bankruptcy.”

Abbott said Friday that it “is clear that the rise in cases is largely driven by certain types of activities, including Texans congregating in bars.”

Tee Allen Parker said she is confused. As a bar owner in East Texas, she’s allowed to walk into church or a Walmart but not permitted to host patrons at Machine Shed Bar & Grill.

“I don’t think it’s right that he’s violating our constitutional rights,” Allen Parker, the lead plaintiff in the lawsuit, said Monday in an interview. “The reason I’m speaking up is I don’t like that he can’t be consistent. You lead by example. Everything he’s said he’s walked back. And I’m disappointed in him because I was a big fan of his.”

Allen Parker drove to Austin on Monday, as she and other bar owners plan to protest Abbott’s order at the Capitol grounds Tuesday. She also hoped for a lunch with Abbott to hash out their differences, but with the lawsuit filed, Allen Parker wasn’t so sure about lunch, or what’s next for Texas bars.

“He wanted the spotlight, so he made the decision to open up first so he could get national news,” Allen Parker said. “But what I know is he’s closed my business and he’s violated my constitutional right.”