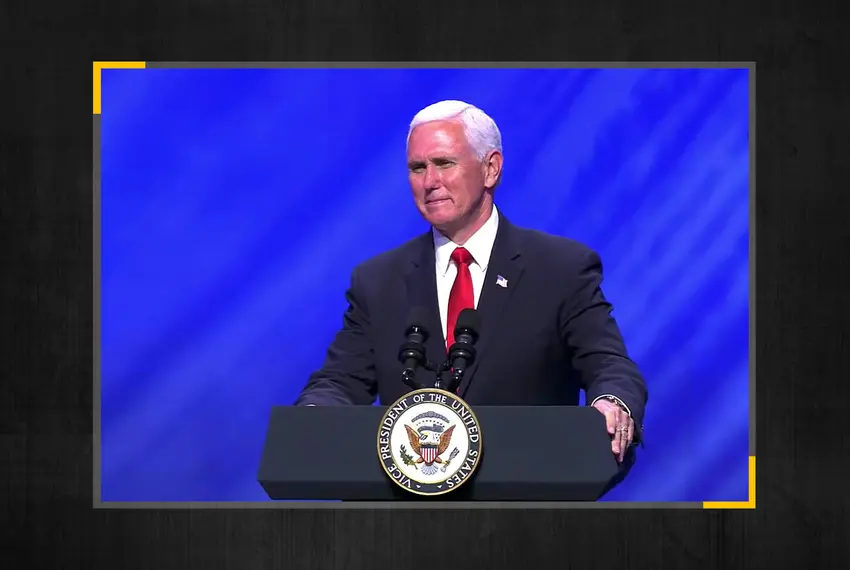 Vice President Mike Pence, during a trip to Dallas on Sunday, promised Texas would bounce back from a recent surge in cases of the new coronavirus while urging Americans to turn to their faith during a tumultuous period for the nation.

“Working with your governor, we will put the health of the people of the Lone Star State first, and every single day we’ll continue to reclaim our freedom and our way of life, as each day we are one day closer to the day we put this pandemic in the past,” Pence said during an event at First Baptist Dallas. “And when we do, with this governor and this president, we’ll bring Texas and America back bigger and better than ever before.”

After the event, Pence — who chairs the White House Coronavirus Task Force — Gov. Greg Abbott and his coronavirus response advisers briefed Pence on the dire situation in Texas. Speaking with reporters afterward, Abbott said the virus has taken a “very swift and a very dangerous turn in Texas over just the past few weeks,” while Pence praised Abbott for his leadership — which has come under heavy fire from Democrats — and pledged the full support of the federal government.

The vice president also emphasized the importance of wearing a mask to reduce further spread.

The talk was a last-minute addition to Pence’s agenda. For over a week, the vice president had been scheduled to appear at First Baptist for its annual Celebrate Freedom Sunday, but he added the meeting with Abbott in recent days as the state confronted its worst week yet for the pandemic.

The number of daily new cases hit a record high Thursday of nearly 6,000, and the number of hospitalizations has reached new highs every day for the past 16 days.

The positivity rate — the ratio of tests that come back positive — has also spiked. The rate, presented by the state as a seven-day average, reached 13.23% on Friday, which is nearly as high as it was in mid-April when it hit an all-time high of 13.86%.

The numbers led Abbott to begin reversing the state’s reopening process Friday, shutting down bars and ordering restaurants to scale back their capacity to 50%, among other measures.

In his remarks at First Baptist, which lasted for about half an hour, Pence thanked Abbott “for his courageous and compassionate leadership for the people of Texas during this challenging time.”

Pence doubled down on his praise for Abbott later in the day, telling reporters after the briefing at the University of Texas Southwestern Medical Center that the governor had demonstrated “decisive action” in reopening the state.

But he and Dr. Deborah Birx, the response coordinator for the White House Coronavirus Task Force, also expressed gratitude for the governor’s recent decision to reverse course to thwart the prolonged rise in cases and hospitalizations.

Pence said Texas has been “testing at an enormous scale” but he also said he had spoken with Abbott about how to “accelerate” testing and results.

After weeks of falling short, the state has finally started regularly averaging over 30,000 tests a day, the threshold that Abbott set when he began to reopen the state at the end of April.

The federal government had been poised to withdraw financial support for seven testing sites in Texas at the end of the month. But after bipartisan outcry, the U.S. Department of Health and Human Services announced on Friday it would extend support for five of seven testing sites that had received aid. Asked Sunday why the extension was so short, Pence suggested financial assistance may again be prolonged, saying, “We’ll be extending that every bit as long as Texas wants us to.”

Pence’s trip coincided with a growing debate in Texas over requiring people to wear masks. Abbott has resisted calls to fine individuals who do not wear masks but has allowed local governments to order businesses to require customers to do so.

Speaking to reporters after their meeting, Abbott, Pence and Birx all urged Texans to wear masks. Birx was particularly emphatic, saying she was “appealing to every Texan to wear a mask. … Every single one of them.”

Pence, Birx and his two other high-profile travel companions, Texas Sen. John Cornyn and U.S. Housing and Urban Development Secretary Ben Carson, all had face coverings on when they disembarked Air Force Two in Dallas on Sunday morning, as did their three greeters: Abbott, Texas House Speaker Dennis Bonnen and Texas Attorney General Ken Paxton. All appeared to remain masked while seated at the church, according to video broadcast by the church.

Pence has made headlines for not wearing a face covering at other public appearances during the pandemic. President Donald Trump has also refused to wear a mask in front of cameras.

Pence did not directly respond to a reporter’s question Sunday about whether Trump was undermining the vice president’s encouragement that Texans wear face coverings.

First Baptist Dallas, led by pastor and ardent Trump supporter Robert Jeffress, had “strongly encouraged” attendees to wear masks and also socially distance. But the video of the ceremony showed most attendees sitting close together in pews, with only some donning masks. Most of the over 100 people in the choir and band sections on the stage were not wearing masks.

The church did not release any information about how many people it expected for the event, but WFAA reported Friday that the church would operate at “70% capacity, which equates to about 2,200 people inside the main sanctuary where Pence will speak.” While Abbott has tightened restrictions on some gatherings amid the coronavirus surge, he has not imposed occupancy limits on religious services, deeming them essential activities.

The campaign of former Vice President Joe Biden, the presumptive Democratic presidential nominee, released a statement ahead of Pence’s trip that said it “epitomizes the dismissive attitude this administration has taken in addressing this crisis from the onset.”

“Our leaders should be tackling this pandemic head on and laying out concrete recovery plans for the American people — not jet setting across the country to hold events that go against basic public health guidance,” said the statement from Biden’s deputy campaign manager, Kate Bedingfield. “Families in the Lone Star state and across the country deserve better.”

There were ample political overtones to Pence’s speech as he touted the Trump administration’s first-term achievements, particularly for Christians. He also drew attention to the “strong support of the two senators from Texas” — Cornyn and Ted Cruz, both Republicans — “who have stood with this president every step of the way.” But he singled out Cornyn, who is up for reelection in November, praising his “principled conservative leadership for our judiciary and our nation.”

Introducing Pence, the First Baptist pastor, Jeffress, hailed Trump as the “most resilient, the most courageous, the most faith-friendly president in the history of America.” He similarly lavished praise on Pence, telling him that many Christians would like to see him in the Oval Office after Trump leaves.