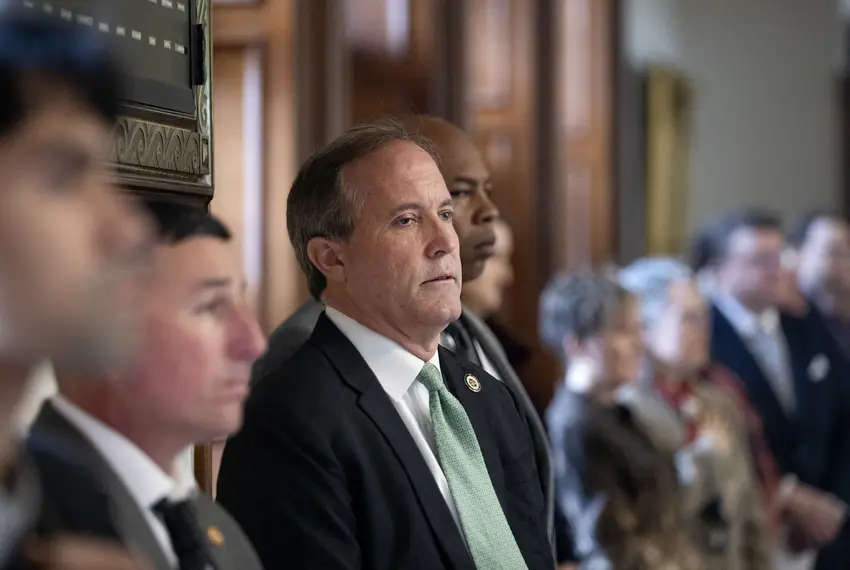 This is not the first time Attorney General Ken Paxton has called on the Texas Legislature to expand the power of his office. Photo credit: Miguel Gutierrez Jr./The Texas Tribune

Paxton, a Republican, wrote in the Austin-American Statesman that allowing local district attorneys — who currently have power over police misconduct cases — to investigate the officers they work closely with creates too much potential for conflicts of interest.

“Apparent or actual conflicts of interest in these horrific cases will only serve to further erode public confidence in our law enforcement institutions,” Paxton wrote. “To restore that confidence, I am asking the Texas Legislature to empower the Texas Attorney General’s Office to investigate and, where appropriate, prosecute law enforcement officer actions that end in death.”

Fatal police encounters rarely result in criminal prosecution of officers. A 2016 investigation by The Texas Tribune showed that only seven of 880 Texas officers involved in shootings had been indicted. But in the last two years, two officers were convicted of murder in the separate Dallas County shootings of a black man and black teenager. Both cases were brought by local prosecutors.

Paxton’s proposal is sure to generate resistance from local prosecutors, who have repeatedly beaten back efforts by the attorney general to expand his jurisdiction over issues like police misconduct and human trafficking, arguing that power is best left to officials elected locally.

Floyd, a black man, died last month after a white officer kneeled on his neck until and long after he lost consciousness. Since his death, protests have erupted across the state and nation against police brutality and racial injustice.

In Paxton’s op-ed, he said Floyd was “brutally robbed” of his life and noted that Texas is also “not immune to allegations of police misconduct.” He mentioned Javier Ambler, a black man who died in 2019 after Williamson County deputies repeatedly stunned him with a Taser him as he told them he wasn’t resisting arrest and couldn’t breathe.

Those comments distinguish Paxton from other GOP state officials who have condemned Floyd’s killing but remained silent on Texas’ history of police brutality.

Expanding the attorney general’s office’s authority in this way would require a new law passed by the Texas Legislature, which next convenes in January.

It’s hardly the first time Paxton has called on the Legislature to expand the power of his office. In Texas, criminal prosecution falls to local prosecutors unless they explicitly seek the involvement of the attorney general.

Local prosecutors sometimes call on the massive statewide agency for help in particularly large or complicated cases, but they fiercely oppose expanding the state’s power to prosecute cases without an invitation — and they’ve won such battles in the recent past.

During the 2019 legislative session, Paxton’s office unsuccessfully pushed for expanded power to prosecute crimes related to voter fraud and abortion, arguing it was necessary to prevent “safe havens” for abortion from forming in Democratic-led counties. That year, Paxton also proposed granting his office the authority to investigate and prosecute human trafficking crimes, but the proposal failed in the Texas House.

A 2015 bill that would have disqualified local prosecutors from handling cases when police seriously injured or killed people and instead would have centralized power in the attorney general’s office died early on in the process, failing even to win approval from a committee in the Texas House.

In Travis County, police misconduct cases are handled by an independent civil rights unit — a structure Travis County District Attorney Margaret Moore told the Statesman she will fight to maintain.