Outside of Texas’ big cities, some are still waiting nearly a month for coronavirus test results from state-run mobile units 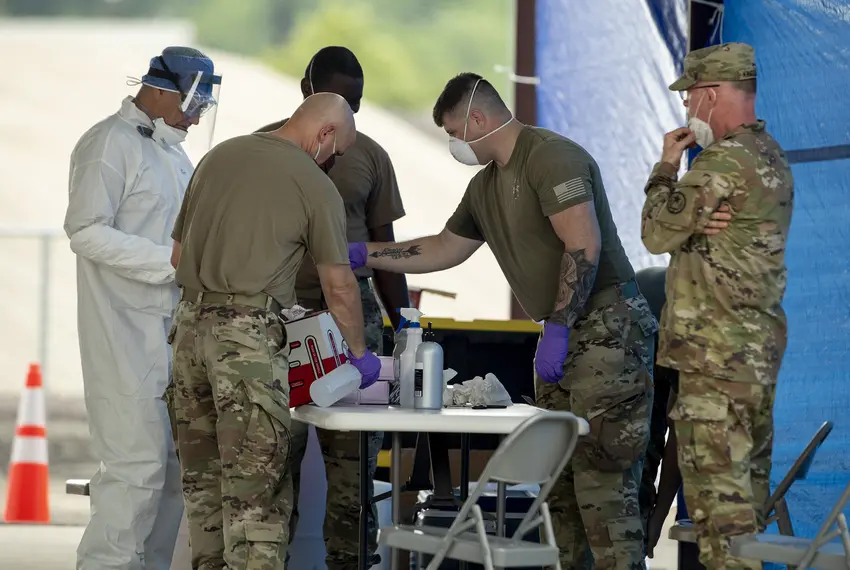 Roving test sites staffed by the Texas National Guard — a state solution to increase coronavirus test access outside of major cities — have sometimes proven to be logistical nightmares or left patients waiting days or weeks to find out if they have COVID-19.

Among them: Gretel Bardin, a two-time breast cancer survivor with asthma, who’s barely left her house since March.

She was tested at a mobile site in Aransas County on May 12, hoping it would give her peace of mind. But it’s “almost a month later, and nobody knows what’s happened,” she said.

Announced by Gov. Greg Abbott in April, the mobile units have made brief stops in more than 220 counties, initially concentrating on rural and suburban areas that are not in close proximity to free test sites that have been available for months in larger Texas cities. The temporary sites are staffed by members of the National Guard and coordinated with the Department of State Health Services and the Division of Emergency Management.

While many county leaders said they are grateful the state swooped in to perform tests, others described short notice and planning challenges, particularly in the first days the units were deployed.

“We would not do it again without knowing it was better managed at the state level,” said Mills County Judge Ed Smith, whose community, 100 miles west of Waco, was among the first to host one of the units in April. He learned the unit would be coming to his county with less than 24 hours of notice, when state health officials made the announcement on a regular conference call with local leaders.

“Surprise!” he recalled. “I’m saying, wait a minute, if I hadn’t been on that phone call, we never would’ve known.”

Some counties have also had test results delayed for weeks after mobile unit visits, significantly longer than the one- to three-day turnaround time now cited by commercial laboratories.

Seth Christensen, a spokesman for the Texas Division of Emergency Management, which helps coordinate the mobile units, attributed the delays and early challenges to the “massive undertaking” of conducting the tests and meeting new reporting requirements.

In South Texas, three Aransas County residents, including Bardin, told The Texas Tribune they are still waiting for results from coronavirus tests performed in mid-May, among the longest delays since the start of the pandemic. In nearby Calhoun and Goliad counties, the results from mobile unit tests took around 10 days at times, according to local officials. In Collin County, near Dallas, officials have heard from residents that were waiting two weeks or more. In West Texas, Coke and Howard Counties saw a 10-day lag, the county judges confirmed.

Christensen acknowledged that there have been “small pockets of delays” but said that for 95% of mobile unit tests, results were received in or “have been pending” for less than a week. That means about 3,000 of 60,053 tests performed as of June 4 have taken seven days or longer.

Still, the wait time has frustrated Texans like Shannon Sawyer, whose daughter went to a mobile unit site in Goliad County after running a 101 degree fever and testing negative for strep at an urgent care clinic. She was told test results would come back via text message within 72 hours, Sawyer said.

But after five days, Sawyer called a number she found online, demanding to know where the results were. One lengthy hold later, and she was told to send an email.

“This is impacting an entire family’s ability to go to work,” she wrote in her email about the delay. One of her daughters had been asked not to go to work until the results came in.

Sawyer received the results from the University of Texas Medical Branch laboratory services late that night. The virus was not detected.

That “72 hours is not accurate,” Sawyer said.

Test samples collected by the mobile units across the state were initially funneled to labs at the UT Medical Branch and UT Southwestern.

Now they are generally flown or driven to Austin and then dispersed among public and private labs. That’s to avoid overburdening any one facility as the state has deployed more mobile units, Christensen said. If there’s a potential delay, test samples will be deep frozen and thawed to ensure they don’t degrade, he said.

Chris Van Deusen, a spokesperson for the Department of State Health Services, said there is no backlog at the central Austin lab, which can process 1,400 samples a day. There are other public labs in the state, but commercial laboratories process the bulk of coronavirus tests in Texas.

Some county officials found the state responsive when they flagged a delay.

Calhoun County Judge Richard Meyer said he contacted state officials after test results had been pending for 10 days and got an immediate response. A second mobile unit visit yielded quicker results, in about seven days, he said.

The state averaged about 21,400 viral tests in the two-week period ending Sunday, shy of a 30,000-a-day goal cited in the governor’s report for reopening the state. It ranks near the bottom nationally on tests by population, according to data compiled by Johns Hopkins University researchers, and there have been testing challenges for months.

In March, the Tribune reported test results were taking up to 10 days to come back, leaving experts without a current picture of the virus’ spread in the state and patients without information they could use to modify their behavior.

The public labs have at times suffered from a dearth of supplies, and private labs initially struggled to expand their capacity — though companies like Quest Diagnostics now say they can analyze 105,000 tests per day with an average turnaround of one to three days.

But Texas has significantly ramped up its testing since the outbreak began and has made targeted efforts in hard-hit or underserved communities.

The governor recently directed state agencies to test all residents and staff in nursing homes, which have emerged as hot spots for the virus nationwide. He has promised to increase testing in predominantly black or Hispanic communities that have been disproportionately affected by the virus. People in meatpacking plants and prisons are also being more widely screened.

The roving units were supposed to bridge a different testing gap in the state’s most remote pockets. Especially at the start of the pandemic, testing was hard to come by outside major cities. Many rural counties went weeks without reporting a single case of the coronavirus, in some cases likely because few or no tests had been performed on residents.

At times, mobile units arrived in rural counties to test just a handful of residents, raising questions about how the resource is being allocated.

In Mills County, Smith praised the military on-site but recounted a number of hiccups.

Smith said he had not asked the state for a unit in his county, where two clinics had already been performing tests. With little notice the unit was coming, Smith ran spots on the community radio station and posted on the county website to quickly get the word out. Still, turnout was dismal: 12 people made appointments.

Test results took seven days to come back, prompting frustration and anger among residents, he said — “because, of course, they’re testing symptomatic people and nobody knew what the results were.”

Curious what his residents would experience, Smith registered for one of the free tests and got a call saying he was approved — several days after the unit moved on.

“Maybe we were purposefully the guinea pig,” Smith said.

Christensen said early problems with the mobile units have been rectified.

Similarly, in San Saba County, across the Colorado River from Mills, officials got just an hour and a half of notice when a mobile unit went to test residents there in April. Just seven people were tested. When a unit came a week later, 11 were tested, according to Marsha Hardy, the county’s emergency management coordinator. In a county served by just one weekly local newspaper, she said she’d need two weeks’ notice to make a testing unit visit worth it.

In Edwards County, where the state is still not reporting any cases, a mobile unit set up for hours on the fairgrounds in late April tested just eight people. County Judge Souli Shanklin said that left some personnel sitting around.

Shanklin said he had not asked the state to send a testing unit.

“It’s not costing the county any money … so we’re not opposed to it,” Shanklin said in an interview last month. “But I’m sure they’ve got more important things to do.”

Meanwhile, in other areas, local officials were desperate for increased testing. Around the same time the unit sat partially idle in Shanklin’s remote county, Kaufman County Judge Hal Richards — who had requested testing assistance from the state — was forced to devise a system for limiting who in his community could access the mobile testing option.

With lots of interest and minimal tests, he said, “we had to come up with a way to choose a limited group.” Ultimately, the unit focused just on first responders on that visit.

Christensen said health officials decided where to send the units in consultation with local leaders and emphasized that some challenges at the beginning of the process in April have since been resolved.

ARTICLE BY BY SHANNON NAJMABADI AND EMMA PLATOFF, TEXASTRIBUNE.ORG

Carla Astudillo contributed to this report.