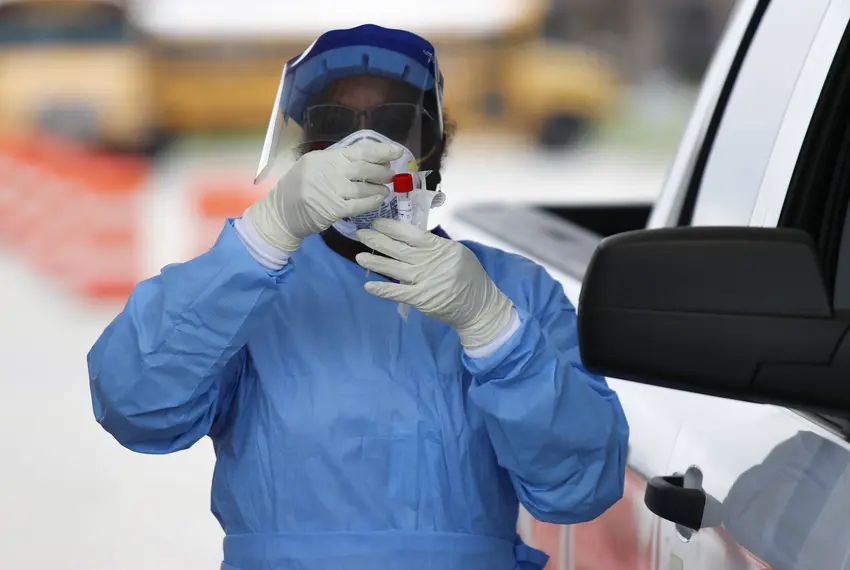 As Texas moves forward with a new phase of Gov. Greg Abbott’s plan for reopening businesses, the daily number of confirmed coronavirus cases is on a steady, upward trend.

Throughout the state, the number of new cases reported each day has grown from an average of about 1,081 during the week ending May 24 to about 1,527 in the past week. (Public health data varies day to day, so officials use a seven-day rolling average to better capture trends over time.)

The 14-day trend line shows new infections in Texas have risen about 71% in the past two weeks. Although confirmed infections have increased across the state, hot spots like state prisons and meatpacking plants, which have recently been the sites of mass or targeted testing, are responsible for a portion of the increase, according to the Texas Department of State Health Services.

Part of the state’s increase of new confirmed cases reported since late May is a result of mass testing in some prisons, which began May 12. Since prisons started reporting test results May 26, the number of prisoners reported to be infected with the new coronavirus has skyrocketed — jumping from about 2,500 to 6,900 in two weeks.

State data shows that overall cases jumped by 19,000, or 34%, from May 25 to June 7, and nearly a quarter of that increase came from 10 counties with prisons and meatpacking plants.

On Friday, Pecos County Judge Joe Shuster told The Texas Tribune that the Texas attorney general’s office instructed the county — which has a prison that led to a recent spike in COVID-19 cases — not to include prisoners in its county infection numbers. Brazoria County officials also said Friday they would no longer include prison cases in their county reports, according to Community Impact.

The attorney general’s office said it could not comment on advice given to local officials because of attorney-client privilege. A DSHS spokesperson said the agency expected to have an update on its data reporting process this week “to ensure that TDCJ cases are consistently included on our dashboard.”

Some of the statewide increase may be attributable to greater availability of testing for the virus. Along with mass testing at places like prisons — where more than 83,000 tests have been conducted — the number of tests rose steadily until the middle of May.

And the percentage of tests coming back positive — a metric Abbott and White House officials have pointed to as indicative of a state’s readiness for reopening — is also increasing. The 14-day trend line shows the positive rate in Texas has risen about 62% over the past two weeks.

In addition, the number of people hospitalized from the coronavirus, reported each day, has grown from an average of 1,656 during the week ending May 24 to 1,811 in the past week.

Abbott has said that Texans should anticipate temporary increases in the positivity rate as the state dispatches surge response teams to three kinds of hot spots: prisons and jails, nursing homes and meatpacking plants.

Abbott announced his third phase of reopening Wednesday, allowing most businesses to operate at 50% capacity effective immediately. Restaurants will be allowed to operate at 75% capacity beginning Friday under the governor’s order.

Edgar Walters contributed to this story.

Third Dallas Man Charged with Theft of Firearms During Protests