Health care workers are living in treehouses, RVs and hotels to protect their families from coronavirus 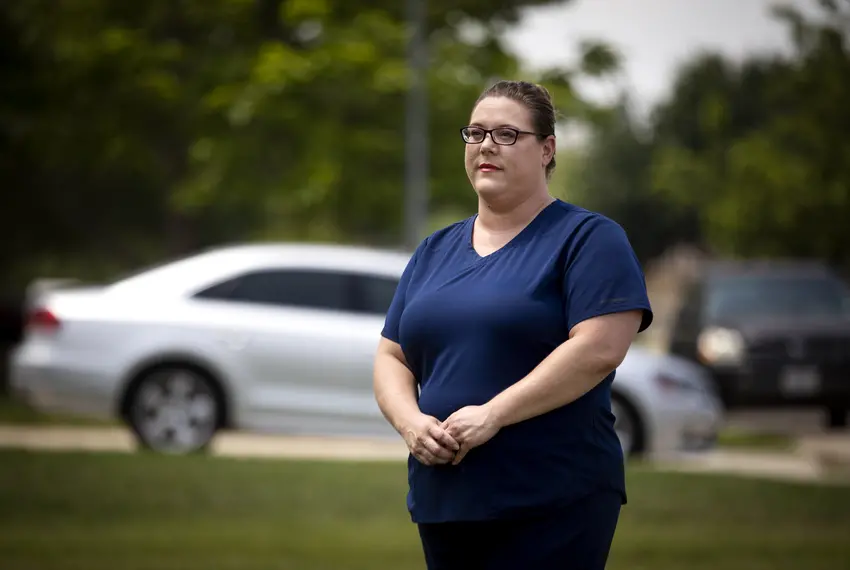 In mid-March, Marissa Hudler and her husband, both health care workers, thought their sons would only be staying with their grandparents for a few weeks. Photo credit: Miguel Gutierrez Jr./The Texas Tribune

It’s been more than a month since Marissa Hudler hugged her kids. Fearful of accidentally bringing the new coronavirus home, she and her husband — both health care workers — sent their two sons to stay at their grandparents’ house in March and don’t expect they’ll return for weeks.

For now, their home is quiet. Conversation with their kids is confined to video calls and the occasional socially distanced visit in a parking lot — where the family gathered to sing “Happy Birthday” to the younger son last month.

“I wish I could have been able to hug him and love on him,” said Hudler, a nurse. “My biggest fear is not if I get it, it’s just if I transfer it to someone else.”

Hudler, like other health care professionals across Texas, is taking precautions to avoid inadvertently acting as a vector for COVID-19, the disease caused by the novel coronavirus. Some providers follow a strict regimen of changing and showering in locker rooms at work, or immediately dumping dirty scrubs in the laundry machine. Others have moved out of their homes in favor of bunking in dorms and hotels; one even took up residence in a children’s treehouse.

Robert Hancock, president-elect of the Texas College of Emergency Physicians, said the “turning point” that made him start taking extra precautions was learning that emergency doctors in Washington and New Jersey had been placed on ventilators. Soon after, a relatively young X-ray tech he works with became sick and the son of his local mayor, in the north Dallas-Fort Worth suburb Trophy Club, died from the coronavirus.

“You start seeing stuff like that, it’s a little more close to home,” said Hancock, who works in emergency departments in Texas and Oklahoma and said he now avoids contact with his much older sister and his mother, who lives down the street.

The Hudlers pulled an RV used for family camping trips out of storage and plan to use it to isolate if one of them is exposed to the virus.

The preventive measures come as health care professionals nationwide have complained that they lack sufficient protective equipment; some have died from the virus, and a New York nurse’s association sued, accusing hospitals of putting nurses’ health and safety at risk.

Shortages of coronavirus tests and delays in getting results have also left some health care providers in the dark about whether they’re treating someone with COVID-19.

That’s not the case for Hudler, who said she feels supported at the central Texas hospital where she works.

In February, she and her husband were unbothered by the growing outbreak. They spent their 15th wedding anniversary on a Valentine’s Day cruise and were preoccupied planning a spring break trip with their young boys — who kept them busy “every day of the week” with baseball and soccer games, Hudler said.

It wasn’t until mid-March — when Gov. Greg Abbott declared a state of disaster— that the Hudlers decided it would be best to send their kids to their grandparents’ house.

It will just be for a few weeks, Hudler thought as she dropped them off.

But less than a month later, she packed two paper bags with enough clothes, contact lenses and supplies to last the kids until mid-May, left them to air outside for 10 days, and then deposited them in a parking lot in Georgetown. When her parents and sons drove up to retrieve the packages, in a socially distant handoff, she waved at them from yards away.

They grow so fast, she thought, looking at her kids.

Not every hospital in Texas has been hit with coronavirus patients. Although there have been hot spots, many hospitals were left largely empty after the governor barred nonessential procedures to free up hospital beds for a flood of COVID-19 cases that has not yet come. Hospitals bled revenue, and employees lost hours and pay — and Abbott, citing the relative dearth of hospitalized patients, has allowed elective surgeries to resume.

But for health care workers with medically fragile parents or children, any risk of exposure to the virus can be fear-inducing — and prompt them to take meticulous precautions.

A San Antonio nurse practitioner said she moved into a workshop in her backyard, a structure without heating or plumbing, to protect her children, one of whom has asthma and another an immune deficiency. She only enters the house to use a bathroom and sanitizes everything she touches with a Lysol wipe. Her kids are old enough to know not to hug her.

“I’m not being protected adequately at the hospital,” said the nurse practitioner, who’s worked with COVID-19 patients and requested anonymity because she’s not authorized to speak with the media. “I did not want to risk exposing them to anything.”

“It’s less expensive than your kid on a ventilator.”

— Katie Spiekerman, a Fort Worth nurse

In Fort Worth, Katie Spiekerman described the lengthy process she goes through every time she comes home: Scrubs go into a hamper in the garage. Robe on. Shower immediately. She runs bleach through the washing machine after cleaning her scrubs.

Her 10-year-old son received a kidney transplant, and his health issues sparked her mid-career decision to attend nursing school. She wanted to learn medical jargon to be a “better advocate” for him, she said, and can now look her patients in the eyes and tell them she knows what they’re going through.

The pandemic has made her even more cautious. Once, when she was treating a patient who may have had the virus, she rented a hotel room for 14 days to quarantine.

“It’s less expensive than your kid on a ventilator,” Spiekerman said.

“We’re being a lot more vigilant about protecting our families. But sometimes it rises to the level of us becoming isolated,” said Fairless, who’s on the board of the Texas College of Emergency Physicians. “We’ve seen a lot of adverse physical and psychological effects.”

It’s unclear how many health care workers have been sickened with COVID-19, though more than 9,000 nationwide had gotten the disease as of mid-April. Seventy-three percent of the reported cases then were women.

Medical facilities have taken steps to protect their employees — by, for example, letting them shower in hospital locker rooms, surgery departments or unused patient rooms.

Outside organizations have also pitched in. Hilton hotels are offering free stays to health care workers. A volunteer effort matches doctors with RVs they can quarantine in.

University dormitories, emptied of their usual occupants, have also opened to front-line employees needing a free place to stay between shifts. Those include Concordia University in Austin and Rice University — where workers at the Texas Medical Center are expected to move in this week.

The Hudlers, at home in central Texas, feel less worried than they did a month ago — when Hudler said she felt scared, anxious and unsure “what the future held for us.”

They hope to have their children home by mid- or late May.