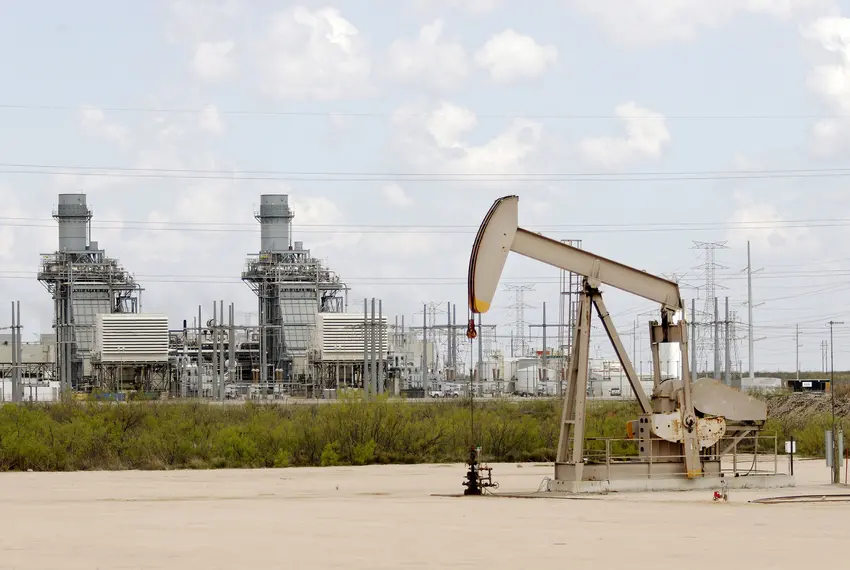 The price for a barrel of oil plunged negative Monday for the first time ever as the coronavirus pandemic has kept most of the world at home, forcing oil producers to pay buyers to take crude off their hands.

People are not commuting or traveling, leading to a devastating decline in global oil demand, and the price of oil has crashed at a rapid rate. One barrel of West Texas Intermediate crude cost in the $60 range to start the year. It has dropped more than 160% since.

Down from around $18 a barrel Friday, the price of West Texas Intermediate crude to be delivered in May ended Monday at negative $37.63 a barrel.

“That’s oil for future delivery in May, called a front-end contract,” Bernard Weinstein, associate director of the Maguire Energy Institute at Southern Methodist University, told The Texas Tribune. “Basically, for producers, this means: I’ve got some oil, I’ll sell it to you and, in fact, I’ll even pay you to take my oil.”

Prices also tumbled for barrels to be delivered beyond May. Oil scheduled to be delivered in June fell 12% Monday to about $22 a barrel. Monday’s drop in prices was a sign that investors — hurrying to meet the Tuesday futures contract deadline for May crude deliveries — are worried there will be no place to put the oil.

As of April 10, oil storage in the U.S. was 57% full, according to the U.S. Energy Information Administration.

The drop in prices is expected to compound the economic and budget blows from the world staying at home. The state was already headed for a recession before Monday, and Texas is the nation’s top oil-producing state, so its economy and budget are highly sensitive to oil prices. When production slows here, employment and tax revenues decline, and budget cuts at the state and local levels often follow.

Oil prices plummeted in early March to what was, at the time, their lowest point in decades after Saudi Arabia declared a price war on Russia. Matters have only worsened because almost no one wants to buy oil and gas these days — people have not been flying, commuting or traveling due to the coronavirus pandemic.

Texas oil producers have already felt the effects, and in addition to closing oil wells, losing money and laying off employees, many producers expect rough times ahead.

“People are preparing for significant pain the rest of the year,” Ed Longanecker, president of Texas Independent Producers and Royalty Owners Association, told The Texas Tribune.

Earlier this month, a large group of oil-producing countries, including Saudi Arabia, Russia and the United States, eventually agreed to cut 9.7 million barrels of oil per day from the global oil market. Analysts have said more cuts will be needed to keep pace with the drop in demand.

“The big Oil Deal with OPEC Plus is done,” President Donald Trump tweeted April 12. “I would like to thank and congratulate President Putin of Russia and King Salman of Saudi Arabia. I just spoke to them from the Oval Office. Great deal for all!”

The deal has hardly worked. In a single day last week, the oil and gas industry cut more than 6,400 jobs. Houston oilfield services company Halliburton has reported a $1 billion loss in the first quarter, and it has already laid off hundreds of employees and furloughed thousands. And Houston-based Schlumberger, the world’s largest oilfield services company, reported a $7.4 billion loss from the year’s first quarter and has laid off 1,500 people in North America.

The Texas Railroad Commission, which regulates the state’s oil and gas industry, is scheduled to meet Tuesday to discuss cutting production and other issues. Last week, its three elected officials — Chairman Wayne Christian and Commissioners Christi Craddick and Ryan Sitton — heard more than 10 hours of testimony from dozens of energy executives, analysts and critics who disagreed about whether the state agency should limit production here.

“While today is a dark day for energy producers and our economy,” Christian said in a statement, “I have no doubt that once COVID-19 has resided and America is back to work, a rebound will occur. This will not be easy and it will not happen overnight, but we will continue to do everything we can at our agency to provide regulatory relief and keep Texans employed.”

Texas Comptroller Glenn Hegar, the state’s chief revenue estimator, predicted last year that oil prices would hover in the low- to mid-$50-per-barrel range through the latter half of 2021. Dale Craymer, president of the Texas Taxpayers and Research Association, has previously estimated that the state loses $85 million a year for every $1 drop in oil prices.

The most recent sales tax figures available don’t yet show the massive dip in revenues that are expected from state and local officials shuttering businesses or limiting operations in mid-March to stop the spread of the virus that causes the COVID-19 disease.

Bars, restaurants and retail stores statewide have reduced operations or closed completely. And as social distancing has roiled the economy for weeks, companies large and small have reduced employees’ hours, furloughed staffers or laid off workers.

More than 1 million Texans have applied for unemployment insurance since mid-March, including 273,567 during the week ending April 11, and countless more people are still struggling to file claims as they wait to feel the impact after the Texas Workforce Commission expanded its staff, added call centers and increased its number of servers.

The March unemployment rate for Texas, 4.7%, doesn’t reflect all the job losses. Analysts cautioned this is because the unemployment rate released Friday is based on March data, which predated the widespread closures and layoffs that escalated later. Before Monday’s drop in oil prices, analysts were predicting the actual rate of jobless Texans is likely greater than 10%, which could be a record high for the state.