Get To Know the Wild Side of Feral Hogs 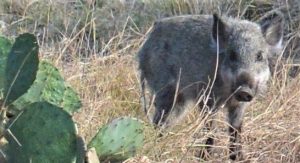 Whether you refer to them as feral hogs or wild pigs, Sus scrofa is a species that is negatively impacting nearly every part of Texas.

Not only do wild pigs wreak havoc on pastures, fields and golf courses alike, they contaminate our water sources and destroy native species. They can also spread disease to both man and beast. Wild pigs cause widespread damage to agricultural lands by destroying crops, the depredation of livestock, and competing with wildlife for resources.

A  2004 Texas A&M AgriLife Extension survey study estimated the annual damage done in Texas by these unwanted invaders as $52 million. Current estimates of the damage they cause nationwide range from $800 million to $1.5 billion annually.

Josh Helchel, AgriLife Extension associate with the Texas A&M Natural Resources Institute, NRI, recently shared some startling statistics about wild pigs and the damage they are doing to the state – as well as ideas, tricks and tips that may help us combat them.

Wild pigs are smarter than dolphins?

They may not appear to be the Einsteins of the animal world, but they are in fact smarter than many species we hold in high regard. Some experts and studies argue that dolphins, killer whales and elephants all have lower IQs than wild pigs. Pigs are widely considered among the brightest of species — and they do beat out man’s best friend in the brains department.

They say everything is bigger in Texas, and this includes our pig population. The U.S. is estimated to have 4 million wild pigs, and we’ve got well over half of the pig population in the Lone Star State alone, based on a 2012 study. That study had Texas at 2.6 million; current population models predict our actual figure is now closer to 3 million. Wild pigs are also largely nocturnal, which means you are more likely to see the damage they do than see the animals themselves.

On May 31, Gov. Greg Abbott signed Senate Bill 317 into law. This permit allows any landowner, landowner’s agent or lessee to take wild pigs without a hunting license. The only time a hunting license is required is on Texas public lands. Unfortunately, recreational hunting alone cannot control the wild pig problem.

Pigs are pretty much everywhere

Over 79% of Texas is deemed a suitable habitat for wild pigs, according to NRI. Wild pigs can now be found everywhere, from farms to the lands surrounding suburban shopping malls. Sows, females, can roam a territory of around 2 miles, or 1,100 acres. That also means that if your neighbor or a neighboring county has wild pigs, odds are it is just a question of time until you do too.

We’d need to eliminate 66% of the population, each year, just to break even

Experts agree that given current technology, complete eradication of wild pigs in Texas isn’t realistic right now. It doesn’t help that pigs are the most prolific large mammal when it comes to reproduction. A sow can average 1.5 litters a year and each litter typically produces five to six piglets. Even given mortality rates, we’d need to eliminate 66% of our wild pig population annually just to stop our population numbers from growing.

Not only can wild pigs infect our water resources with E. coli, but they may also carry 15 other diseases, some of which can be transmitted to people. Swine brucellosis and tularemia are two particular concerns to humans. There is also the threat of tick-borne diseases like Lyme and Rocky Mountain spotted fever. That said, when handling a dead pig make sure protective latex gloves and eye wear are worn and avoid bodily fluids. Like all pork, wild pig meat must be cooked to a minimum of 160 degrees before it can be safely consumed.

They learn to avoid traps quickly

As we mentioned earlier, pigs are smart — really, really smart. If you set a trap that only captures one or two animals at a time, odds are pretty good you won’t catch any other wild pigs that saw the earlier misfortune of their brethren. You need to have a trap large enough for the entire sounder, or group, or you’ll be looking for alternative means to capture the pigs from the sounder that got away.